The other teen at co-op is also in 4-H, a different county but they all have the same project areas.  Dancer and her both participate in gym and art but not science since we are doing a grade school science book.  This last week they did the foot work for a consumer education project.
Together they made four different kinds of pancakes, three from box mixes and one homemade.  During our science time they were busy mixing and frying pancakes. 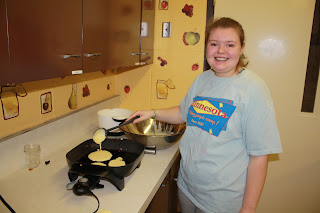 We forgot our griddle so Dad called a lady he works with that lives in town and asked to use her fry pan.  Thanks Kristin :) 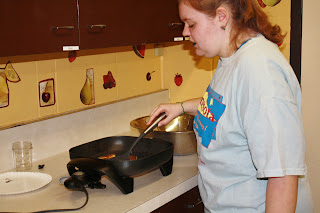 They fried and fried all these cute little pancakes. 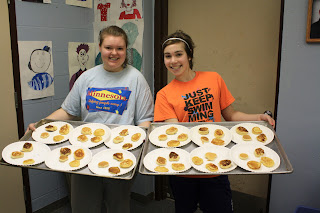 On the plates they numbered 1 through 4 and then put a pancake on each number. 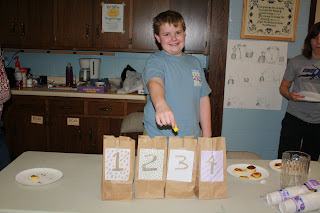 After the kids tried them all, without syrup or butter, they each got a Lego piece and dropped it in the bag with the number of the one they liked the best.  Homemade won by the way.  After the testing we made large pancakes and everyone had a pancake lunch, with syrup and butter this time.
Next week the girls will have to figure out the cost of each one and plan how to display the information.
The rest of the day we went to the library, did a little shopping, found a few geocaches and ultimate Frisbee started up again.  The kids played Frisbee late and I said I don't have anything planned for dinner so we should stop for something or it will be at least 8:00 before we are eating.  We ended up having super at Five Guys.  While were sitting there, Dancer said that it was just the best day ever.  I asked her if was as good as a birthday day and she said it was for sure.  So happy to have those once in a while, I thought it was a great day too.
Posted by ~*~The Family~*~ at 12:45 AM