We are down to one bale of hay. This year we did well to get all the way to the middle of May before running out.  Selling our big buck Klaus this fall certainly was a big factor in that and only have four other goats doesn't hurt the hay bill any either.  We finally got a hold of the guy that we buy hay from every year and his bad news was that he has about 20 bales, that are more suited for bedding than feed, and his field isn't close to being ready to cut.  We, actually that will be Dad, will have to call around and find some this weekend.  Until then we will feed more alfalfa pellets, corn and get them out to get a graze on. 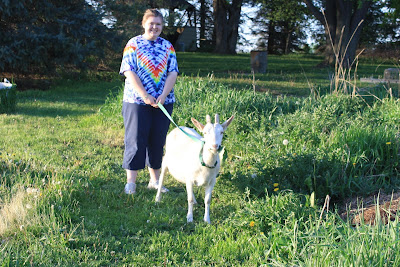 Desdemona out on the leash to eat by herself because she is so mean that she can't be in the corral with anyone else or she butts the heck out of them. 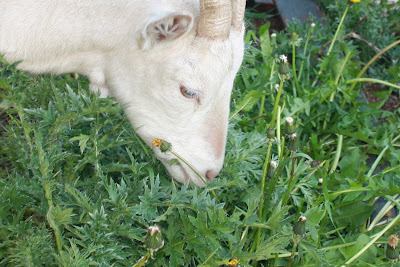 Nice thing about goats is that they love weeds and we have plenty of them.  Goats have really tough mouths and can eat thistles, pine trees, or anything else sharp without flinching. 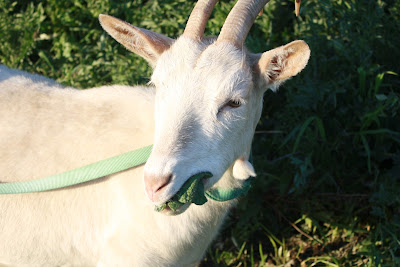 She enjoyed a little burdock.  One of her favorites in amaranth but we didn't get down the row that far. 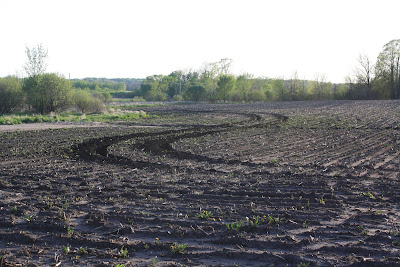 They sprayed the field behind us today with some chemical concoction.  Is it bad that I was a little happy that the field was too wet on this end so they weren't able to spray the whole end without getting stuck?  Would it have been bad that if they had gotten stuck I would have been more than a little bit happy?  Farmers have a higher incidence of some cancers compared to the general population thought to be cause by these chemicals, and the owner of this field lost his dad to cancer, but yet he sprays year after year.  Thankfully he only sprays once. 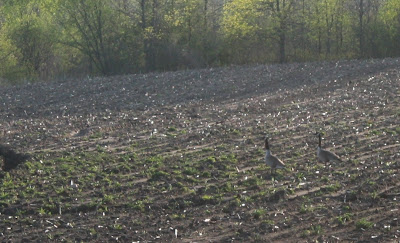 Every night we have been seeing up to seven Canadian Geese in the field, tonight there were only two and I was glad since they are standing on poison. 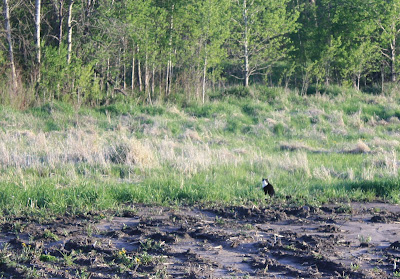 Kacheekers hunting down at the wet end. 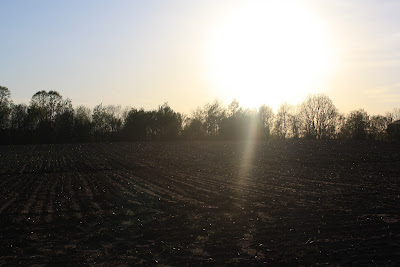 I don't think its wrong at all that you might have been a bit happy that he got stuck. You and I could have sat on the edge of the field and laughed and pointed at him. And sprayed the field with more water. You know...so he got REALLY stuck. :)