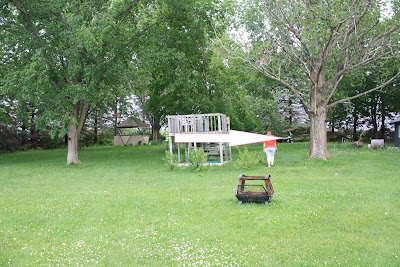 Q:  Where does your lawn mower run out of gas?

A:  As far away from the garage as possible.

That is Spark there at the end of the arrow way behind the apple trees.  I guess he could have been behind the pine trees, that would have been farther from the garage.  There were but a few drops of gas in the gas can so Dad had to run into town to get some more.  He wanted me to go with but I had Desdemona out grazing and the kids were mowing so I didn't want to leave them alone.  This was a good thing.

While in town Dad tested out another Murphy's Law:  Your truck will break down on the holiday weekend, not conveniently on a week day morning. 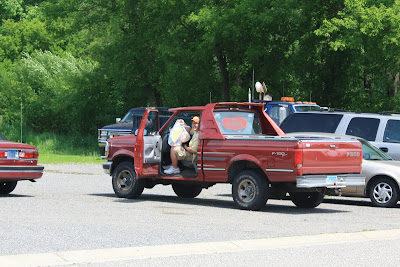 Then he tested out:  Your family will be outside when your truck breaks down and won't hear the phone ring until you have called a minimum of eight times.  He was able to limp the truck to the repair place, walk to the grocery store, shop, walk back to his truck and still had time left over before we learned he was stranded and got there.  I had a great joke for him, well I found it funny anyway.  Right before we got there to pick him up he called again wondering where we were.  "What do you mean?" I asked him.  He went on, quite nicely I must admit, to explain that his truck broke down and we needed to come get him and how did I miss that in our previous conversation and where were we.  By now I couldn't hold it together any longer without laughing and had to tell him we were just rounding the corner.  Here he is getting out with all his groceries and he is actually smiling to see us.

Okay, enough Murphy's Law today, let's not have anything else happen.