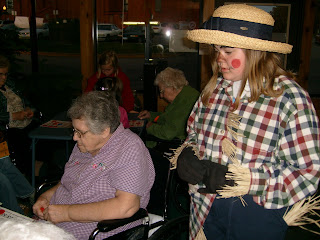 Tonight was our 4-H meeting. First was a community service project of helping residents of the local nursing home play BINGO. The kids dressed up in their costumes and then went along side a resident and helped them with their bingo cards. Some people were able to play on their own and then others needed help with hearing the numbers being called, getting the chips on the cards or showing them where the numbers were. 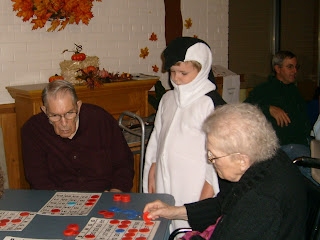 It was a nice turn out, about 40 people came to play and then our club had about 15 kids there. The winners could pick between a candy bar or a quarter. Most of them wanted the quarter. They played for an hour and then we helped them back to their rooms. The Boy was helping a woman with her wheel chair and I ran after saying I hope he drives it better than a shopping cart. Hate to take anyone off at the ankles. That is always my fear at the store, actually we don't 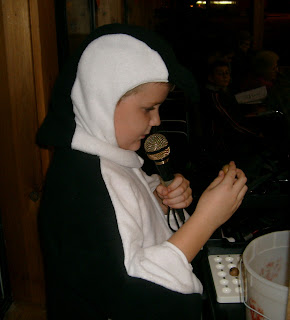 let him even push the cart and more for that reason.
He got her back safe and sound though. A highlight for him was getting to call the bingo numbers. He did a great job talking into the microphone and call the numbers nice and clear. A fun thing at the nursing home is that they have cats there. The two saw were both huge and when the walked down the hall their tummys swayed from side to side. They must just go from room to room getting themselves treats! Ahh, to be a cat.