Halloween ranks right up there as possibly our favorite holiday. All we do all day is party, party, party. We started out the day with a homeschool party. The party includes lunch, crafts, games, playing, a parade at the nursing home complete with haunted house and a time to share jokes, songs, stories, poems, dances, or anything the kids have been working on. Next we were on to dinner and trick or treating at friends house in town. The kids forgot their jackets and crafts at the party so after trick or treating we went back to their house and had a nice visit and the kids got to play with friends again. And to top off all of that, the kids got cards from Grandma and Grandpas. Any day the kids get mail makes it a good day for them. 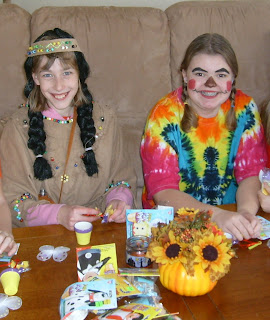 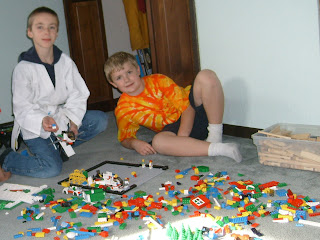 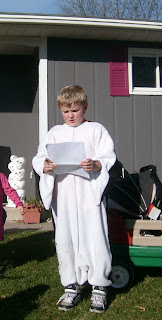 Sharing time - the boy told this joke. He thought this was just the funniest thing!
A man is walking home alone late one foggy Halloween night, when behind him he hears:BUMP...BUMP...BUMP...Walking faster, he look back and through the fog he makes out the image of an upright casket banging its way down the middle of the street toward him. BUMP...BUMP...BUMP...Terrified, the man begins to run toward his home, the casket bouncing quickly behind him.FASTER...FASTER...BUMP...BUMP...BUMP....He runs up to his door, fumbles with his keys, opens the door, rushes in, slams and locks the door behind him. However, the casket crashes through his door, with the lid of the casket clapping.clappity-BUMP...clappity-BUMP...clappity-BUMP...on his heels, as the terrified man runs.Rushing upstairs to the bathroom, he locks himself in. His heart is pounding; his head is reeling; his breath is coming in sobbing gasps.With a loud CRASH the casket breaks down the door.Bumping and clapping toward him.The man screams and reaches for something, anything, but all he can find is a bottle of cough syrup! Desperate, he throws the cough syrup at the casket...and,(hopefully you're ready for this!!!) The coffin stops. 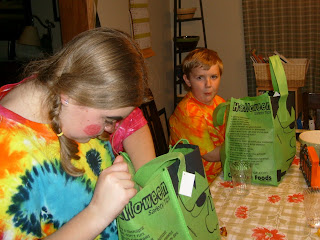