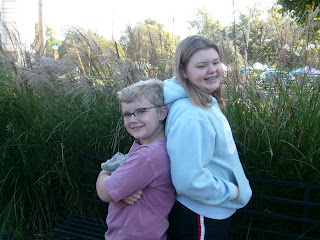 Our first stop of the day was a Farmers' Market in Bentonville. We wanted to see another market to check out the vendors, prices, and to get some new ideas for our own stand. One surprise was that eggs sell for $4.00 a dozen, ours only sell for $2.75 although we do always sell out. Otherwise, 700 miles doesn't seem to make too much difference in the prices. There a few veggies that we are unable to grow well because of our zone so they were fun to see. There were great ornamental grasses around the market so we had to take a picture of the kids by them because the Boy is always on the lookout for new grasses. He has a spot for grasses in our yard but so far only has zebra grass planted in it. He bought a new gourd that he doesn't have in the garden. Last year he got a gourd, let it dry over the winter and planted the seeds this spring. It was very successful for him so for next year he has dreams of a huge gourd patch with new varities in it. 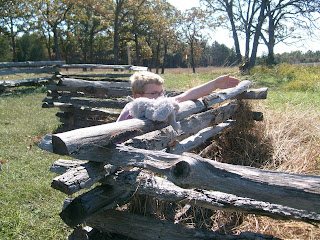 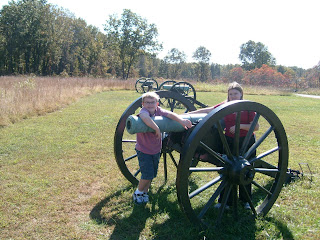 Next stop was Pea Ridge. It is a place were a Civil war battle occurred. There is a nice visitor center with displays of guns, uniforms, photos, and equipment used in the battle. We watched a great movie about the battle. Sometimes, unfortunately not when we were there, there are reenactments of the battle. There is a self guided car tour which goes around to all the different spots where highlights of the battles took place. 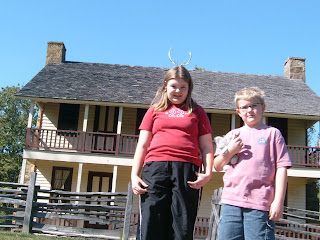 One of the really big battles took place in front of the Elk Horn Tavern. It was eerie to be standing there on vacation knowing that in the same spot others were fighting and dying. We didn't feel the presence for ghosts but perhaps if we had walked through the woods we would have. The Tavern was then used as a hospital for both the Federal and Confederate wounded. This is a remake of the original tavern because a few years after the war it was burned down by Confederate Guerrillas. You can see by the horns on top of the Girl why it was called the Elk Horn Tavern. It wasn't open when we were there but we did get to peek in the windows. 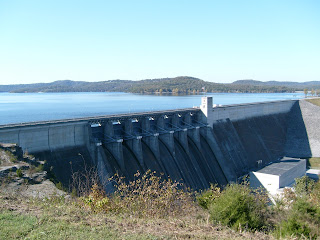 Beaver Dam and Beaver Lake was another field trip we made. The dam was built in the early 1960's to control flooding and to generate electricity. It was amazing to drive over the dam and See a huge lake on one side of the road and a 230 foot drop to a small river on the other side. It is also hard to believe the huge amount of materials that it took to build such a large structure, both the concrete portion and the much larger earthen dam next to it. The dam is operated by remote control from the dam at Table Rock L 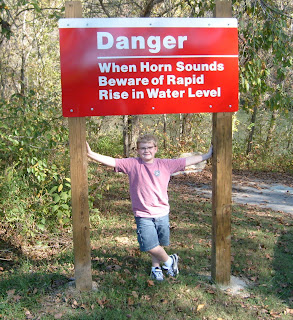 ake in Missouri so there aren't any personnel or tours there.

There are big homes, cabins, resorts and pretty views around the lake. They say the lake bottom has lots of old homesteads, farms and villages so it is a popular scuba sight. We continued to Eureka Spring after Beaver Dam. It is always an adventure seeing any sights in the Ozarks as all the roads are nearly continuous dangerous curves, impossibly steep hills and shoulderless roads with sheer cliffs on each side.
Eureka Springs is town that gained fame as a tourist and healing center towards the end of the 19th century, it is a tourist town still today. The town was home to many mountain springs reputed to have great healing powers. There hotels built on the sites of some of these springs. 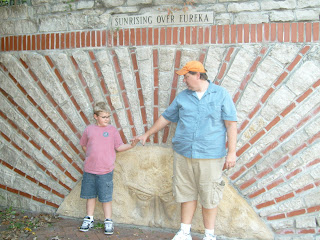 The hotels, and other building were built a century ago and are in good repair. The hills are so steep here that you can enter a building on on street and exit 5 or 6 stories higher or lower on the next street. Parking is terrible and there is LOTS of walking and stair climbing. The town is very picturesque and fun to visit, though it seems much more commercial every time we visit. Everywhere you look there someone has planted a little plant or left a ceramic or cenment embellishment. The whole town looks like a big yard salad. It doesn't look junky and we thought that their longer growing season and milder winters helps keep things looking nice. The only thing we bought here was a bit of chocolate that we enjoyed in a plaza where steep cliffs and historic buildings provided the scenery.