For history we do a study called "Story of the World". Today, we studied about the Greek Dark Ages. It is called the Greek Dark Ages because the barbarians were too busy taking over lands. They didn't write anything down because they didn't know how to read or write. Here we are making a Mycenaean war helmet. The Myceaeans were the people the Barbarians attacked. The real helmets were made out of bronze with fleece on the inside. Our helmet is made out an ice cream pail. 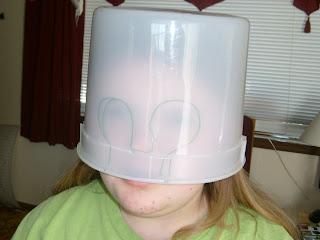 I have the pail on my head and we drew the outline for where to cut the eye holes in the pail. After we cut out the eye holes, we cut up a paper bag to put around the bucket to make it look like bronze. 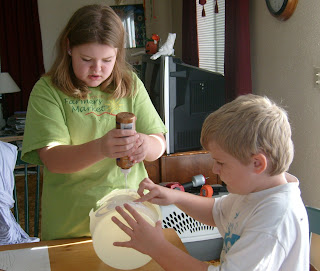 Then we covered the outside of the bucket with glue and smeared it around with our fingers to get a nice even layer. 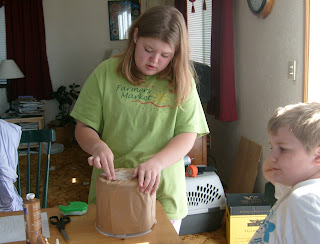 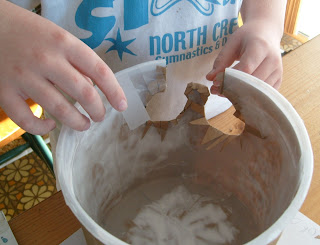 The next step was to cut slits along the paper where the eye holes are. We folded it in so it was snug and layed flat. We used tape to adhere it to the inside. 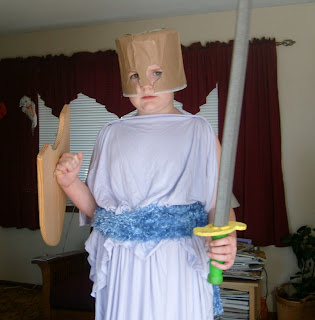 We dressed my brother up in a toga. To make the toga we took a full sized bed sheet and folded a bit of the top down. We put it around him under his arms so that equal amount of fabric was in the front and back. We pinned the tops together above his shoulders and used my scarf as a belt. Mycenaean warriors probably didn't wear purple with fuzzy blue belts but it works for us.

Love these! My boys would relish at the thought of getting to make these. I wanted to stop by and invite you to participate in a Homeschool History Buffs carnival, you can go to http://www.ourlifestyleoflearning.ning.com to join!