The morning started so nice with Spark coming in to snuggle on the bed with me. Mmmm, he is so sweet. Then he says "Mom, are you going to get up, it's 1:00?" After I spun over faster than a pig on a BBQ spit to look at the clock, he says "just kidding!" and zooms off. He is getting more like his father every day. 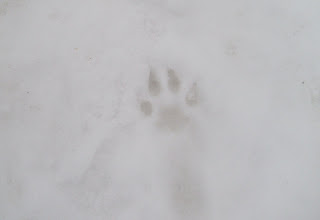 Going out to the barn there was a long trail of these foot prints. We are guessing them to be fox prints. It is time to get out the live trap or it will be back every night for his duck supper until they are all gone. Last year we lost a few to a raccoon until we caught him.

The ducks seemed to be on cloud nine with the spots on the yard that have no snow on them. Once they find a puddle they turn it into a mud puddle. We are going on our fifth month of snow so they are probably thinking that migration thing other ducks do is not such a bad idea. Actually, ours are domestic ducks so they don't fly all that well. 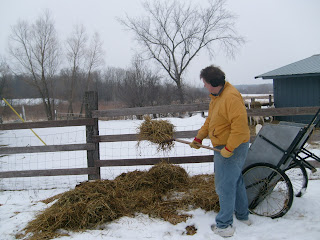 Dad started the spring cleaning in the barn. In the sub zero winter temps everything is frozen down so we can't get do much cleaning in the stalls. Here he is putting some on one of the flower beds. By the time he tills here, if spring ever comes, it will be mostly composted. 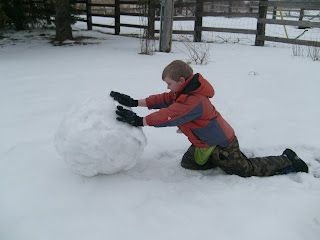 The warmer temps have made the snow sticky enough to make snowballs. Spark and Dancer made a snow fort. Snow fort play has come a long way since I was a kid. Video games have seeped into every part of their lives. Their game had three levels of play, easy, medium and hard. There was a set amount of money and buying snowballs was determined by how much money one had. They can also 'reset' the game. The game was quite creative and I know they are retaining the history we do. They were Rome attacking Asia Minor, Britain, Greece, Spain and Cesar's son-in-law Pompey's head came from Egypt on a Fed Ex truck. 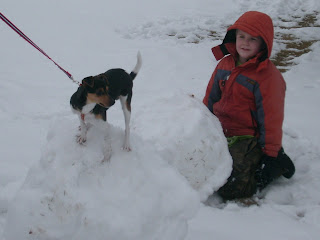 Nikki played Queen of the Snowball. 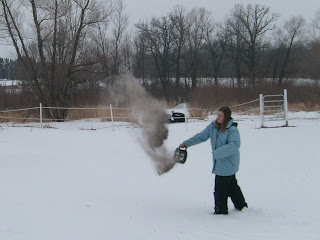 We got a little science experiment in while we were outside. Dancer threw ashes out on the yard to see if the dark color from the ashes will attract heat from the sun and melt the snow faster or if it doesn't matter and white snow melts at the same rate. 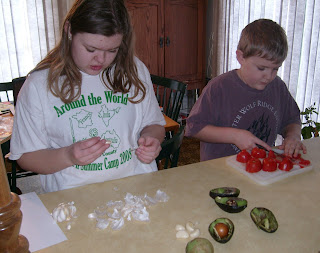 We came in and made guacamole for lunch. Here is our recipe.
Guacamole
5 ripe avocados
3 Roma tomatoes
3 sweet peppers
3 garlic cloves
1 onion
cilantro to taste
3 tbsp. olive oil
sea salt to taste
lime juice
Mash the avocados. Dice the tomatoes. Run the peppers, garlic and onion through the food chopper. Mix everything together and get out the chips. 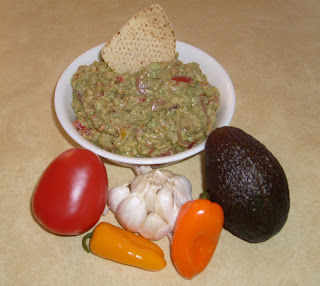 This is so good, I am hungry just looking at the picture again. 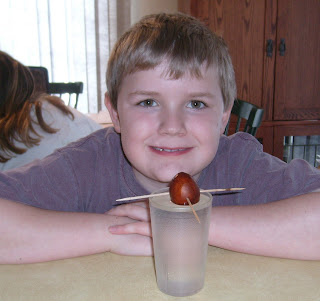 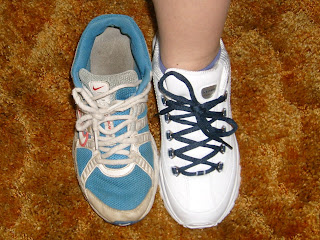 Dancer changed the laces in her new tennis shoes from white to blue. She got new ones last night and we bought a size 7. Her old ones were a size 5. Why she never complained how small the old ones were is beyond me. She just got new tap, jazz and ballet shoes because her toes were coming out of her old ones and I should have thought then that her street shoes probably didn't fit either. The picture shows that there is quite a significant size difference between the two shoes. 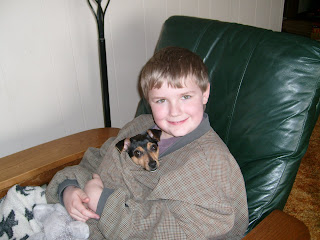