They are still coming 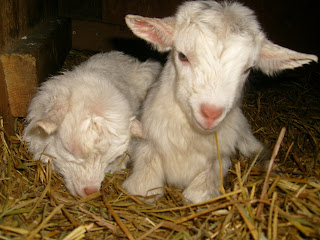 Lots of births around here! Maggie had these two little cuties today. I saw her mate with the buck so we knew she had been breed but she just didn't look pregnant. We commented the other day that her udder maybe looked a bit bigger but she was still slim. Our thought was perhaps she was infertile this year or didn't get pregnant until much later in the year because other years she has been so big she could hardly get up when laying down. The kids went out to check the barn this afternoon and Dancer came running back in. I assumed she was going to tell me that Elizabeth, the goat who looks like she is about a month over due she is so big, was kidding. Nope, she says that Maggie had twins. Sure surprised us, I think goats like doing that. She still looks the same as before she had them and they were both quite good sized. The last two years she has had major problems with kidding so I was very pleased to go out and see that she had delivered both and was doing wonderfully. I guess third time was the charm for her.

While we were wiping off her babies the rabbit Dawn was frantically pulling out her tummy hair and stuffing it in her nest. Tonight I felt in there and it was full of baby rabbits. I didn't feel around too much because I want her to take care of them as the last time she didn't.

Of course, with all these new babies we are having a snow storm and it is cold, -11 with the wind chill. Tomorrow is suppose to be -6 with just the temp but after that we are expecting upper 30's and 40's. If they all get through the next couple of nights they should all be fine.
Posted by ~*~The Family~*~ at 11:13 PM