Two down and two up

Sometime in the next couple of days we are expecting baby bunnies. Three rabbits are due to have kits in the next days to a week. One of the rabbits is the only one who managed to raise babies this winter and she only had success with rearing two. We have no where to put the two when we put the nesting box in for her later this week and if we left them in with her they would kill her new babies. So today we butchered both of them. They were getting on to five months so were full grown and at this point would only being putting on fat. We put them in the freezer. I would have made them for supper but the kids had named one of them and serving him tonight would have just been too soon.

The rabbits are no sooner in the freezer and a goat starts acting oddly in the corral. After checking on her, sure enough she was in labor and her water was about to break. Once we got out there she had them quite readily, but she must have been pushing for quite some time. Perhaps she just needed a bit of cheering on. The first goat needed help to be born. I pulled his legs and Dancer pulled on the doe because that little guy was stuck like Pooh in Rabbits hole. Once his head started coming out we could see that his tongue was sticking out and that is not a good sign. After him, she had another kid without any problems or assistance. The first little guy's tongue was blood red as were the insides of his nostrils. His gums were so swollen that they covered his teeth. He also could not stand on his back legs nor would he even put any weight on them, just let them hang. We brought him in the house and Dancer started to mother him. She got him standing, then walking and finally coming over to her to nuzzle. We are bottle feeding him at least until tomorrow when we hope he will be strong enough to go back with his mother and nurse. He made a visit to her tonight so that she won't forget him and hopefully get him to nurse from her but the nursing was unsuccessful. Tonight he is getting better coloring in his tongue and nose and his gums are not near so swollen, even his teeth are showing through. He is resting in the recycling bin, we didn't have anything else to put him in, and tomorrow we will work with him and his mom again. In all the goats we have had here over the years we have never had one alive that has had such trauma from birthing. We assume that she was pushing hard for a while and it was too hard on his poor little head. They also looked like they were over due. Glad to have them here safe and sound. We have at least two more does to kid this season. It is always an exciting but stressful time. 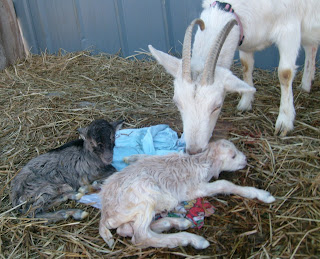 Here is the mother, Cecelia, and her two newly born babes, both of them are bucklings. She had them outside in good light, with plenty of room, and in the middle of the day. That is miraculous all in it's self. Usually they have them wedged in the corner of a stall and if there are problems, they are delivering late at night when you are tired and can hardly see in the dark.
Posted by ~*~The Family~*~ at 12:54 AM

Those baby goats are the cutest ever! The Homeschool History Buffs carnival is up and running. Come check it out!