"Dad, your lard is coming out"

"What?!!" retorts Dad as his head whips around to look at Spark who stated this so matter of factly.

Dad wasn't sure what to think when Spark told him this. Should he be insulted? It sounds like a major slam.

Spark had just come out of the bathroom where Dad was fixing the trim on the window trim he had put up. Every time he put a piece of trim up on the right side of the window it would crack. He even had to go buy more trim because he went through the first pieces we bought. Now he is just going to glue it because it is getting to be a rather spendy. He had the caulk gun, or whatever he is using to fix it, on the counter and Spark had pulled the trigger part way when he was in there. A long line of the construction adhesive was slowly oozing out and he realized that he might as well tell what he had done because there was no way to get it back in the tube. 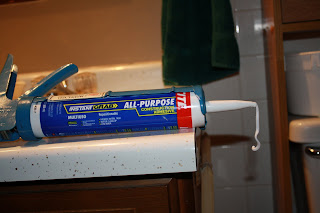