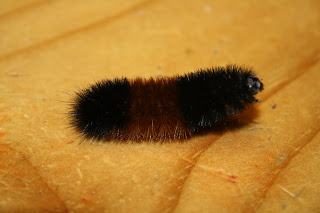 The woolly bear caterpillar is the larva stage of Pyrrharctia isabella, or Isabella Tiger Moth. This moth has eggs which hatch in the fall and the caterpillar's overwinter. The caterpillar survives the winter by producing a chemical cryoprotectant, or antifreeze, that protects tissues in harsh North American winters. It is said that the width of the middle brown band can be used to predict the severity of the coming winter. The wider the brown band is the milder the winter.

The bands this year are relatively wide so one might expect a mild winter. Some scientists discount the predictive value saying the bands grow wider as the caterpillar ages. Maybe, but if the band is wider because the winter weather is delayed and the caterpillar grows older (with a corresponding wider brown band) they are least reporting the weather as being milder so far.

Biologists, in general, are lacking in fun and imagination. (Settle down, I have a BS in biology myself) While eagerly believing that any process of nature can be broken down into physics and chemistry equations, it would be impossible for a tiny bug to know how to prepare for winter. Apparently only multi-million dollar satellites (that conveniently provide good paying jobs to science types) can predict the weather correctly about half the time.

This just in, from expensive satellites, NOAA and
local TV meteorologists:
Temperatures cold,
or possibly hot.
a chance of rain
or not.
Over this winter I will provide periodic Woolly Weather Reports to see how this cute little fella does, stay tuned!!!