Summer of the Monkeys Book Club

For this months book club we made a game like Jeopardy to go along with the book Summer of the Monkeys. There were two rounds, just like the television show, where the girls played for bananas. I went through the book and made questions to fit under different headings. The first round had questions about names, numbers, monkeys, Rowdy, Daisy and Nurse Daisy. These questions were just general questions from the whole book. The second round, when the banana points were doubled, was questions more specific to a part of the book. These topics were drinking in the bottoms, going to town, spending the money, catching the monkeys attempt 1, catching the monkeys attempt 2, and catching the monkeys. Since these questions were worth more bananas, I made them a little bit harder, especially the ones that were for 10 banana points. 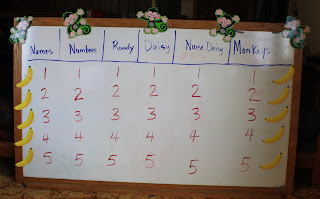 For the game board we used the dry erase board. I found at the craft store some little monkey and banana cut outs that teachers would use on a bulletin board. These we used for the top of the board and along the sides for the banana points to jazz it up a bit. As the girls picked the topics and banana amounts, Spark erased the banana number off the board. For the second round we quickly erased the whole board and wrote the numbers and new headings on. 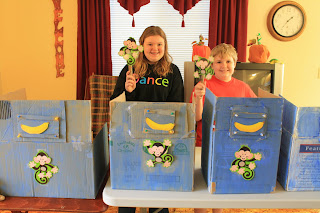 Spark and Dancerer made these boxes for each player to stand behind. The girls wrote their names on a banana and stuck it on the little name plate on the front of the box. For the buzzers, Dancer cut some sticks and taped a monkey on the top of it. When they knew the answer they raised their monkey stick. Two moms judged who raised their stick first and one mom kept score. If they got the questions right she add on the bananas and if it was wrong she subtracted the bananas. This ended up being much more fun that I ever thought it would have been, there was so much laughter! The winner of the game won her very own real banana. With no corporate sponsors we had to do things a little lower key than the actual Jeopardy game. 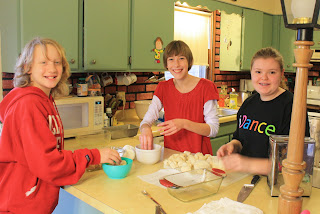 The girls made the bread while we were waiting for all the guests to arrive, one had a time conflict, so that we could eat it hot out of the oven after the game.
Posted by ~*~The Family~*~ at 5:53 PM