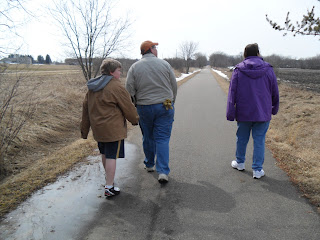 We have miles and miles of paved trail in our community, so nice for biking and walking.  That's barn gloves Dad has hanging out of his back pocket. 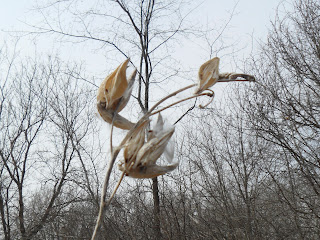 Spark found some milk weed and ran waving it so that there will be more milk weed this summer.  Hmm, spreading weed seeds, only boys would think that is a cool idea. 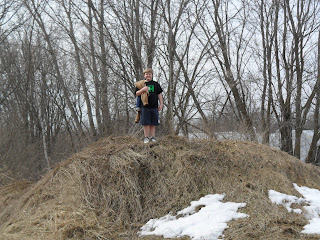 King of the hill.  Dad says that Spark is like Nikki when we walk, he is here, then there, then looking at this, then he is way behind us, then way ahead of us.  He probably walks about three times as far as the rest of us by his zigzagging all over.  Every time he went somewhere he would yell, "Take my picture!" 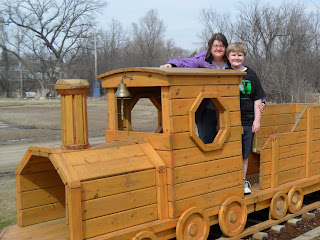 Spark and Mom on this wooden train that was built to commemorate the 100 year anniversary of the train coming through town.  It was built in 2009.  There is also a really nice bathroom picnic building here.  I commented that if the pioneers had come through and found a building with bathrooms, running water, electricity with a big covered picnic area they would have stopped right there and moved in. 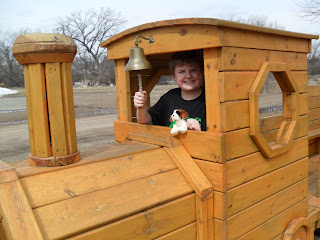 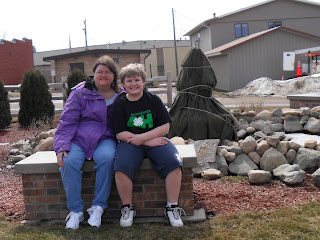 In the summer this is a beautiful fountain, now it looks sort of like a space capsule.  We were pretending it was warm out. 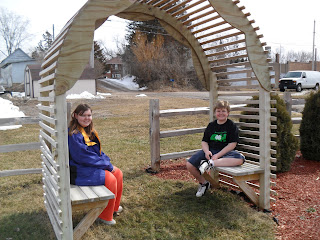 Another spring want to be picture. 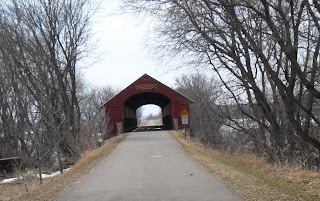 The only covered bridge that I know of in our area.  It has benches on the sides to sit and enjoy the river that runs under it. 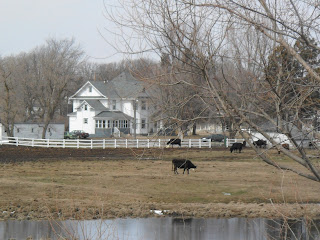 This farm is right in town, not unusual in our neck of the woods.  They are right across from the grain elevator so how handy is that? 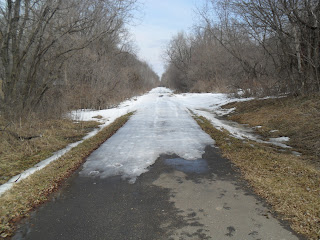 There is still plenty of snow.  We got this far on the trail and turned around because it was covered with snow that was about six inches thick in the middle part.  We couldn't see how far the snow went and it was slippery so we check in a few weeks to see if we can pass through.  There was a guy riding bike and he turned around too. 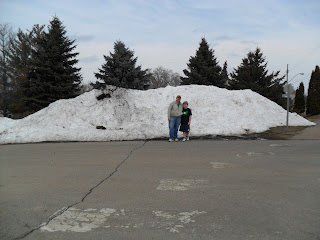