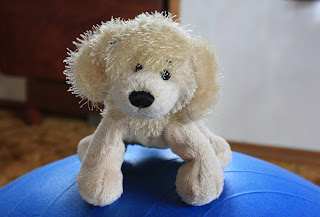 Whenever we go any where Spark brings a couple of his little animals with.  This last Saturday we were out and about and Dad had Jason stuffed in his coat because he didn't fit in his pockets.  We stopped at the grocery store on our way home, Dad unzipped his coat when we got in the store and Jason must have fallen out unbeknownst to Dad or any of us.

That night Spark realized that Jason was missing.  Thinking back over the day the only place we thought, or rather hoped, he could be was at the store.  So all Sunday no Jason :(

This morning, on his way home from work, Dad swung by the store and asked if they had a lost and found.  "Sure we do," the girl at the service counter replied, "What are you looking for."  Dad told her he was looking for his son's little tan dog.  "Is it this cute little guy here?" she asked and held him up, he was right under the counter. "Yep, that's the one, that's Jason" said Dad. Whew, the where is Jason mystery was solved.

Now we wonder what he did most of the weekend.  Did he hang out in the meat department?  The dog food aisle?  It is a 24 hour  store so he wouldn't have opportunity to get into to much mischief.  Jason is really good at math so Spark's thought was he probably helped people balance their check books.  Whatever  he was doing we are just glad he is home!
Posted by ~*~The Family~*~ at 9:07 PM