Dancer loves, loves, loves the Pirates of the Caribbean movies.  She has been counting down the days until the new one came out for months.  She had a friend who was going to the Thursday night/Friday midnight showing and she could have gone with her but we said no.  She was fine with that but she knew that her friend had seen and she hadn't.  We told her since she couldn't go to the midnight showing we would go to another showing some other time.  She has been doing everything she is suppose to be doing and getting all her work done with no nagging from me so we wanted to reward her with the movie this weekend.  Problem is I hate to go to a crowded movie and this weekend the parking lot at the theater was packed (we drove by a couple of times).  There are 18 screens and they were showing it on eight of them and I would guess all eight were packed.  To keep our promise we said that we would go to the Sunday night late show.  I didn't think it would be very packed on a Sunday night at 9:00 p.m. even if it was opening weekend.
Earlier in the day Spark said that he would rather see Rio.  Not being a huge fan of the Pirates of the Caribbean movies, I jumped at the chance to say that Dad could go with Dancer and I would go with Spark to Rio. 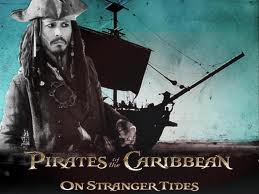 Dancer and Dad headed down to Pirates of the Caribbean, which was only being shown on one screen at that hour.  There were about 30 people there, I know because I counted them as they came out when we were wondering where Dad and Dancer were.  Where they were was watching every last credit roll by because Dancer wanted to experience every single second of the movie. 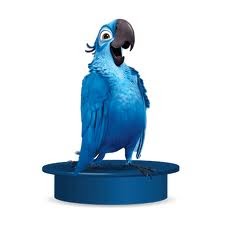 Spark and I saw Rio.  I actually hadn't heard of it until Sunday, nothing against the movie I  just don't keep up on such things.  It was a cute movie about a parrot that gets bird napped and has to find his way back to his owner.  I think that I enjoyed it because we have a parrot and Blu, the parrot in the movie, did a lot of the same funny things that our Bert does.  There were only six people in our showing, one of which was a mom with a smaller boy.  When I saw them I thought, good we won't be the only ones here with kids and look odd for being out so late on a "school" night.  Spark really loved the movie but we didn't sit through every last stinking credit.
Posted by ~*~The Family~*~ at 9:05 PM

I'm glad Dancer stayed to the very end. I don't understand people who leave before the credits are finished. All the poor people who worked on the film...Plus, there was an extra scene at the end of the credits.

We went on opening day for my son's birthday (He's a big fan). Because it was a Friday matinee, we had a fairly empty theater to enjoy it. Yay homeschooling!