We should have been mowing the lawn tonight but instead we went to find a few geocaches at near by boat landings.  We took Nikki, who is afraid of almost everything including water.  The first three days we had her she shook continuously.  We thought she was cold, she weighted about three pounds and wasn't much bigger than a Guinea pig.  Now we think that she must have been scared.  She came from a fine place she just has a nervous personality. 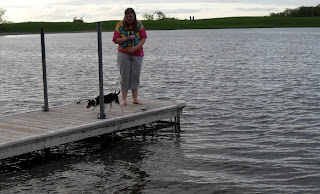 We took her out on a dock and after a few minutes she quit doing the Army crawl and actually stood up. 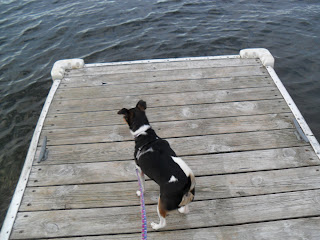 This was as close as she was going to get to the edge. 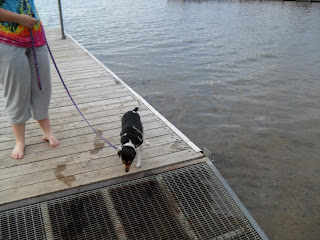 She wouldn't walk on these grates that are at the beginning of the docks. 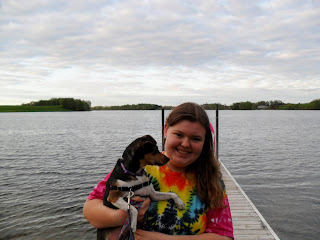 Dancer carried her across them. 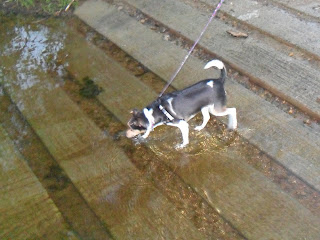 Then all of a sudden, the dog who doesn't like to get wet past her toe nails, was in the water and acting like she was enjoying herself! We don't usually take her with us because she is so hyper and nervous about everything, but we are starting to take her with more so she doesn't have to be in her kennel so much.  She has to be in there when we are gone or she does naughty stuff. 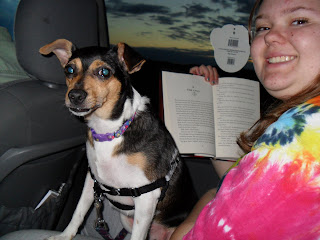 The scene from the back seat, Dancer reading with Nikki riding on her lap.  Dancer usually does word finds in the car, she loves word finds.  Today we were at the library where she got some new books and it is hard to write with a dog on your lap so she was reading tonight. 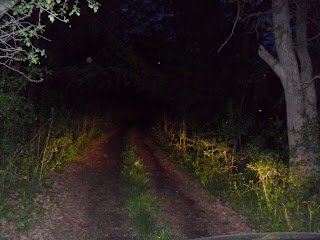 The last boat landing we were going to go to was down this road, which wasn't much more than an ox trail.  The road was half a mile long and when we got .3 of a mile down it there was a humongous mud hole that there was no way I was going to drive through.  The problem was there was no way to turn around and it was almost dark.  The road is so narrow that there was only a few inches on each side of the car until the woods started and once in a while not even that much.  I don't know how you would ever get a boat down there.   Anyway, not being able to turn around meant that I had to back out.  We started backwards with Dad trying to tell me when I was getting to close on one side.  I was trying to keep the grass between the  front two tires but that meant I couldn't see when the road turned and there were a few long stretches where there was no grass in the middle of the road.  The kids kept saying that I was doing a good job, and Dad kept directing my backing up, but Nikki must have been tuned in on how tense we all sounded because she started doing her choking, coughing hyperventilating, panic attack thing she does.  I didn't even know dogs could have panic attacks before her. Dancer got her calmed back down and Dad got out and helped by walking right behind the car even though there were enough mosquitoes out there to leave him completely bloodless if it had taken much longer than it did.  How long did it take?  A good twenty minutes, that tells you how slowly I was creeping along.  After about .2 of a mile there was place where I could turn the car around in couple back up pull forward maneuvers.  We were almost back to the beginning of the road but I was still happy to drive out hood first especially since there was house right at the beginning of the road where a man was out with his dog and waved at us as we drove in.  I bet he was thinking, look at those idiots they are never going to get down the road and back again in that vehicle.  What he should have been doing is frantically waving at us that we would be facing peril if we ventured down the road.  We are going to go back again, not at dusk like tonight, park and walk down to the lake.
Posted by ~*~The Family~*~ at 10:22 PM