Nazca Drawings and food of the Amercias

The Nazca were the people who lived in South America in ancient times in what is now Peru. The Nazca left behind very few clues about themselves. However, two thousand years after the Nazca lived in South America planes flew over Peru and saw drawings that covered hundreds of miles. The drawing were scraped into the earth and because there is little rain in the area of the drawings they are still visible today. There are drawings of a monkey, pelican, hummingbird, flowers, spider, flowers, squares and patterns. How they drew these no one knows. Some thoughts are that they were great at math or that they used the stars for their guides. 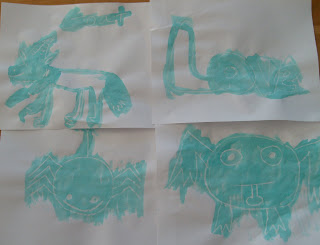 To see what it would be like to make a picture without being able to see what you were drawing the kids made these using a white crayon on white paper. After they brushed them with water colors to see how well they had done. They enjoyed this and each of them made several drawings.

One of the foods the Nazcas ate was cassava. They dried and ground it into a powder to make pudding. Tapioca is made from the cassava root, also known as manioc. Their pudding probably didn't have apples in it but we wanted to spice it up a bit. Here is the recipe we tried. It was so good we didn't even have any left overs and we are already looking forward to making it again.
Baked Apple Tapioca Pudding 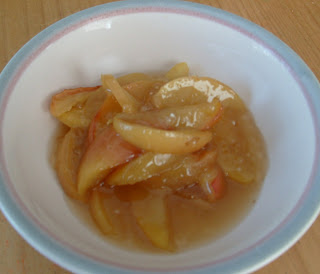 Navajo Fry Bread
These would have been typical of people in North America. Not sure where they would have gotten baking powder over 2500 years ago so we assumed that they would have had unleavened bread. We ate these with guacamole and garlic hummus. We know that they wouldn't have had hummus be we eat it on almost everything so the fry bread was no exception. 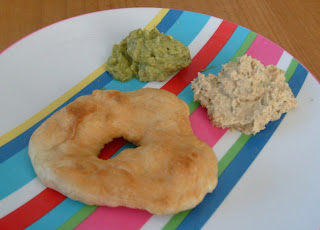 4 C. flour
1 tbsp baking powder
1 tsp. salt
1 1/2 C. warm water
oil for frying
Mix together dry ingredients and add water. Knead dough until soft and elastic and does not stick to bowl. Roll dough into balls and flatten in your hands until it is about 1/4 inch thick. Make a small hole in the center. Heat oil and fry until brown on both sides. 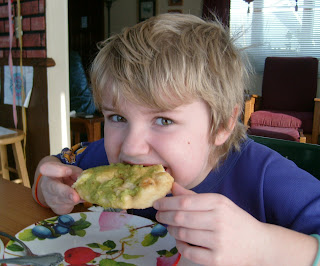 The fry bread was so good! Don't think they would be classified as healthy but they sure were tasty.
Posted by ~*~The Family~*~ at 7:02 PM