All the little birds on 370th street

I almost couldn't believe my eyes today when I saw a robin. As we drove further up the road there was a whole flock of them! We usually don't see robins until most of our snow is gone which is normally the end of March or the beginning of April. We have had a couple of weeks of below normal temps for us, wind chills have reached the -50 degree mark, so we don't know what they are doing here. The only thing we could think of was that someone has a really rockin' bird feeder. We are in the middle of farm country where they could be living in a corn crib but that just seems odd. For what ever reason, they are here we can put in the record books that we saw robins on the 21st of January.

Today we had wonderful temps, almost 30, and in the sun it felt like spring. We took advantage of the beautiful weather to be outside and releave some cabin fever. First thing was to get the deck shoveled off so it is easier to take the dog out. There was about two feet of snow on it with a thick layer of ice underneath the snow. Tomorrow is suppose to be even nicer than today so hope the ice is gone as well or at least melt enough that we can scrape it off. I know we will get lots more snow but at least we will start with a clean slate on the deck. 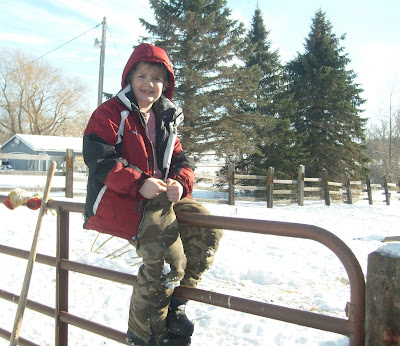 Spark took a little break and perched on the corral gate to soaked up some sun. 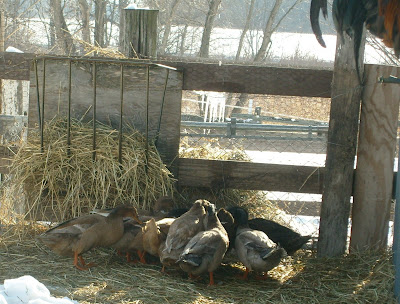 The ducks were excited about the water that was dripping off the barn. You can't see the drips very well in this picture but as they fell they would catch them in their beaks and stand under the eaves like it was a mini shower. 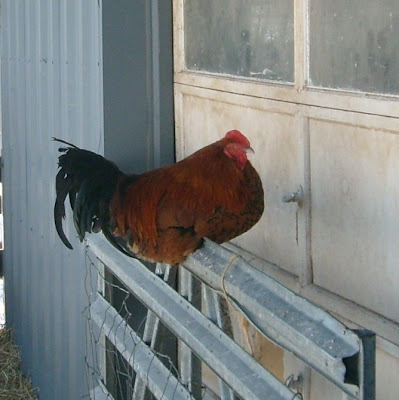 This is Wooton one of our roosters. He doesn't really like to be inside unless the weather is really bad or cold. He does spend a lot of his time looking in this window at all the animals inside the barn and it is where he sleeps at night. We have another rooster who doesn't like to be outside and they are not best of friends. It may be a domain/territorial issue between the two of them and Wooton hates it outside but other one is at the top of the pecking order. Who knows with chickens! 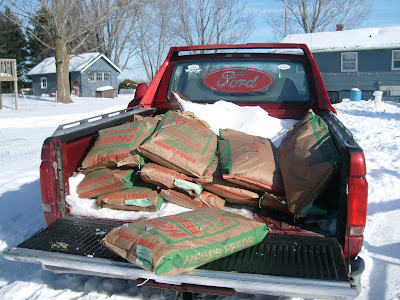 It seemed such a treat to do chores and unload feed in the warm weather today. It is actually very enjoyable to be out there on nice days. The snow was soft enough though that the truck got stuck, the snow was up to it's axel, and so we had to shovel and push to get it back out of the yard. 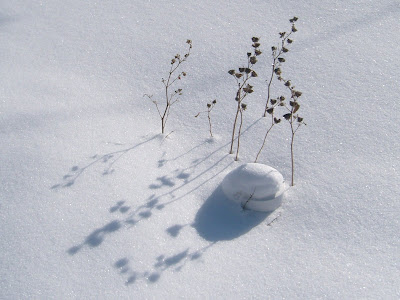 Even with the nice weather it is obvious all over the yard that it is still winter. It is days like this though that get us through to spring.
Posted by ~*~The Family~*~ at 8:04 PM