Finally, the day to pick fiddleheads has arrived! For the last few weeks we have been scouring the ditches where they grow, anxiously waiting for them to show themselves. They are only the right size a few days out of the month of May so proper timing is crucial. This spring has been quite cold for us so they are later than usual. 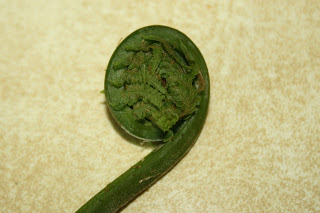 A fiddlehead is the beginning of a fern plant, the frond, right before it grows into a plant. If there is already unfurled ferns then you missed them this year but will know where to go next year. The fiddleheads usually grow in wooded, rather moist areas. The easiest way to find them is to walk down in the ditches looking up as they seem to be rather elusive when searching from the road. 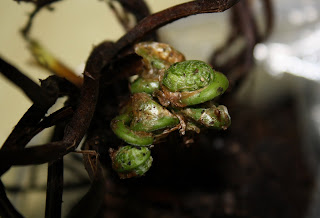 They grow from a crown like bulb and fiddleheads come up in clusters of sometimes up to 10 or so of them. The desired part is the little curled part that you just pluck off the crown. 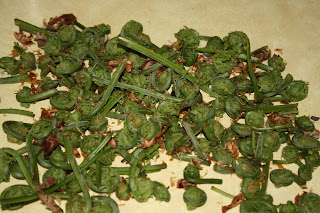 We hit the jackpot today and got a rather large crop of them. Many more were just starting so hopefully tomorrow we will find just as many waiting to be picked.
To clean them, the brown papery covering needs to be picked off as well as possible. The brown part comes off easy, it is just a tedious job.

To prepare them we just saute them in a bit of olive oil for a few minutes or eat them raw. We discovered that we loved eating them raw because the first year we found them Spark was little, about four years old. We brought them home, excited that we had found them, but wanted to be sure they were in fact fiddleheads and not something poisonous. As I was searching the Internet for a picture, he comes over with a mouth full of them and asks what they are because they were really good. My kids are obviously not picky eaters and will try anything. They tend to go with the philosophy of eat first, ask questions later.
Posted by ~*~The Family~*~ at 6:04 PM