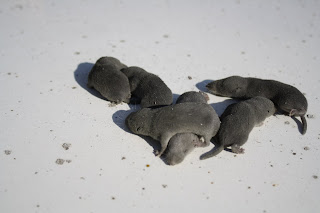 The kids thought they hit the jackpot this afternoon. While trying to get the trailer out from behind the tree line to go and get a lawn mower we bought, Dad moved a piece of particle board. Under the board were all kinds of tunnels. When the board came off, and the sun shown on the tunnels, these little voles started scurrying to a pile of fluff. The fluff was a glorious nest of baby voles living in a very shallow tunnel with an entrance and an exit. From poking around at the hole six voles came out. Spark comes running the house with one to show me the incredibly adorable prize he had just found. While he was seeing cute, I was seeing vermin rich with germs. Dancer had the rest in a sidewalk chalk box and she was holding, petting and playing with them. They were utterly dismayed that I wouldn't want to do the same, but I did take a picture of them on the hood the truck. If I had found them, I would have added them to the cat food chain. But after looking into the faces of my children and taking into account their tender feeling for the little critters, I told them to put them back in the hole for the mother to come and take care of since there was only six, they were a long way from the barn and I am sure a very small percentage of the vole population at our yard. They couldn't have been more than about a week old as their eyes weren't open yet so they must still need to be nursing. It took a long time for Dancer to get those six to stay in that shallow little tunnel. As soon as she would get one in one end, another would run out the other end. Finally she got them all to stay in, they probably figured out that was the only way she was leaving and they would stop getting picked up. I don't know if the mom will come back now since they were handled so much and their house completely dismantled. Either way, the kids feel like they will be okay and that is all that matters to this mother.
Posted by ~*~The Family~*~ at 9:33 PM

uh oh! I guess your as soft hearted as I am! My kids would have done the same.