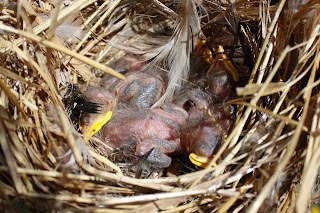 These two Haikus were inspired by a nest of baby robins taken out of the roof of our house. A soffit had rotted and there was a rather large hole in the space under the roof and above the eaves. We had seen that a bird had taken up residence in there and nailed a chunk of paneling to the front of it so she would stop making her nest in our house. She didn't take the hint and pushed the board aside and started her little family. When the men came today they tore it all out, including her nest of four little birds. She was watching the whole time and so we hope that she will start tending to them in the tree we relocated them to. If not, we are sad that they may not survive, but don't care to have them growing up in the space right next to our bedroom ceiling. 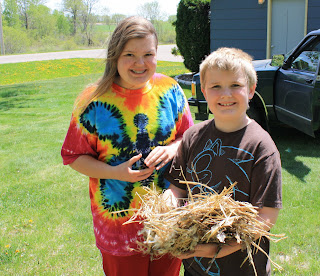 The kids with about a third of the nest she had constructed. I don't know how many eggs she thought she was going to lay as her nest was just massive. There was even a corn stalk in there.
Posted by ~*~The Family~*~ at 2:46 PM

Very beautiful haiku(s). Let us know if the mama takes care of those babies after their move.