I mentioned the other day that is really wet here and we had to let the chickens out of the coop because there was no way to make it dry and they were standing in mud.  They have been making their way around the yard, pecking here and there, enjoying the bugs and what the garden has to offer.  They have been so busy we haven't hardly even seen them.  They did make one appearance.  I was in the bedroom, which shares a wall with the front porch, and I hear all this clucking.  I assumed that they must have found something good because when one of them does they call to the others so I didn't give it much thought.  We were getting ready to leave and when we opened the front door here is what we saw. 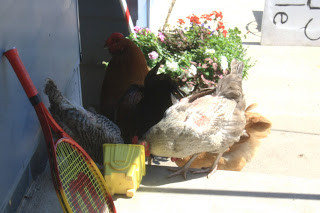 They found something alright, the cat food.  They had the container tipped over and we were really going after it.  Once we came out they ran off, I think they know I don't like them on the front step, but it was too late, the container was empty and they had full crops.
Posted by ~*~The Family~*~ at 9:11 PM

They try to eat the dogs food around here and they help themselves to the calfs food every feeding time!

LOL! That is so funny! Silly chickens, cat food is for kitties!