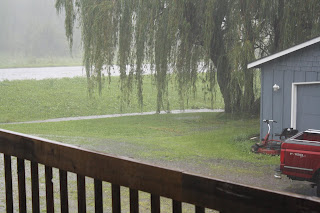 My mom and dad came for lunch and when we said good-bye to them at about 2:00 p.m. it was hot and sunny out.  At 2:30 it was dark as night and we were headed in the basement because the rain was coming down in buckets and the wind was blowing it sideways.  We never go in the basement as I like to be watching from the porch or out the slider windows when there is a storm.  I figure the house has been her for about 40 years what are the chances it is going to get blown over.  This afternoon though we changed our tune and headed downstairs.  I did sit by the window though and could hardly see anything outside because the rain was so heavy.  The picture above is after it started to lighten up.  There was about an inch of water on everything, the patio, the drive way, the rocks around the house, every place water shouldn't be able to stand.  We didn't know if we were in a tornado watch or not as the electricity went out before the rain even started.  The whole thing lasted about 30 minutes.  I wanted to see if my parents got home safety but without electricity I needed to use the cell phone.  We don't have good cell phone coverage at our house because we live in a low spot and the signal goes over our house.  To use the phone we get in the car and drive up to the closest hill and call.  When I finally did get a hold of them they said they had to sit on the side of the highway for the 30 minutes it took for the storm to blow through because they couldn't see.  They said that up and down the sides of the highway people were parked.  That is when you know that the weather is bad when everyone pulls over.  I can just imagine how confusing that had to be for my mom. 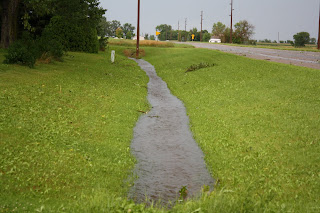 On the way out of the driveway we saw that we now had water front property. 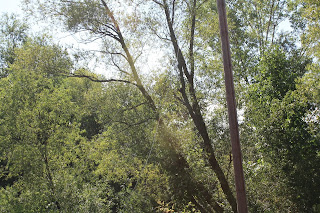 We also saw that our beautiful big oak tree at the corner had been blown over and took the power line with it.    It is hard to see on here but that is our power line dangling from the pole.  Normally we don't call the power company when the electricity goes out assuming that someone else will have already alerted them but a line in our yard certainly warranted a called.  Add them to our call list when we get to the top of the hill.  Further down the road there was also a tree laying on a power line but the line wasn't broken like ours.  A little further and there was a line that was sagging over the road, it was so low that a big truck wouldn't have been able to get under it.  Good thing the power was our or there would have been live power lines much to close for my comfort. 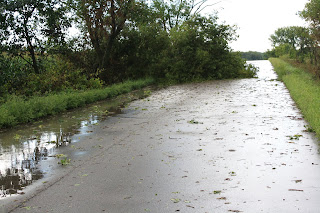 Lots of trees were down and blocking the roads.  By driving over the branches we were able to just get by this one. 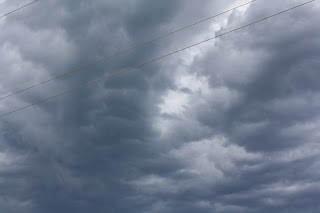 Here is how nasty the clouds looked after the storm.  They stayed like this until well into the evening and we kept expecting them to open up any minute and rain on us again. 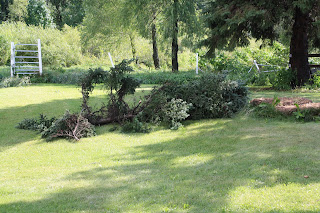 This is the top to one of our fir trees, about 15 feet of it broke off.  We lost a lot of branches and many of them were stuck in the ground so hard we had to tug to get them out. 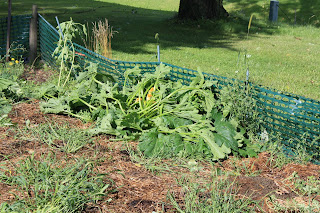 The sad zucchini blown up against the fence.  We had some little hail too so it has holes in it's leaves.  The whole garden is tilted towards the east but it came through pretty well with no major damage. 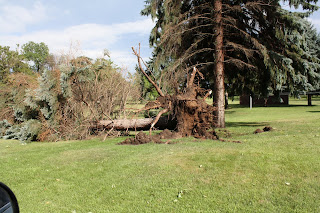 There were lots of trees ripped out of the ground like this one, not in our yard thankfully. 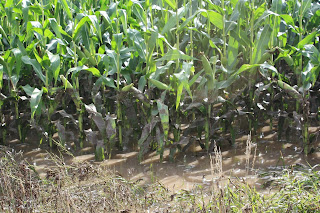 Water was standing in the corn fields.  This one looks good, many of the fields were laying flat.  It had been such a good year so far too, this is a shame. 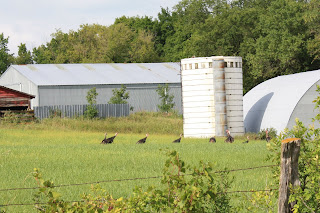 The rain must have stirred up the bugs and worms because this flock of turkeys were scouring this field. 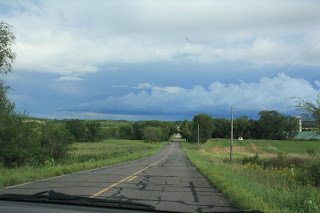 More not so friendly looking clouds.  They never did amount to anything else. 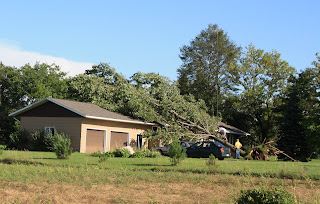 This is the worse damage we saw, a tree laying the roof.  From the road we couldn't see how much damage there was.  There is a man climbing up the tree like a monkey.  Don't think that is such a good idea.  The house is for sale, they are going to have to change the listing to a fixer upper!
Our area had the worst damage and our lines were fixed with the power was back on by 8:30 p.m. and our losses were minimal so we are thankful.
Posted by ~*~The Family~*~ at 11:04 PM