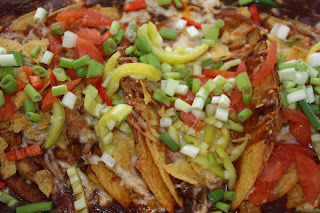 These enchiladas were out of this world.  We are writing down the recipe so that we can duplicate them since, like a lot of our meals, they were thrown together with stuff we had on hand.

Brown the hamburger (2lb) and put in a couple teaspoons of creole seasoning and a large pinch of brown sugar.  Stuff the taco shells with meat and cheese.  Stand these up in a 9X13 pan.  Heat enchilada sauce until boiling in sauce pan on stove top.  Pour the enchilada sauce over the whole thing but leave a lot of taco shell sticking up with no sauce on so they stay hard and crunchy.  Put in oven for 20 minutes at 350 degrees.  Sprinkle cheese on top.  Heap on vegetables.  Broil just until cheese is melted.  Just a few minutes so watch that it doesn't start to burn.  Serve with sour cream and more vegetables.   This will easily serve six or seven people big portions.
Posted by ~*~The Family~*~ at 12:35 AM