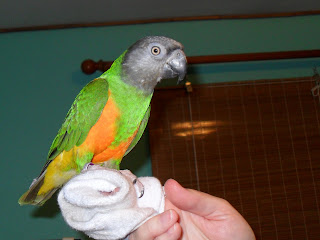 When we got Bert, his old owners told us that he would "step up" on your finger.  We have been trying and trying to get him to do it and he never made a move towards stepping up.  Finally, finally, he stepped up on to my fingers.  I have a socked wrapped around them because he does bite and draws blood.  If he bites something, and it doesn't pull away, then he quits biting it.  I want him to bite the sock not my finger.  We think it must mean that he thinks it isn't something trying to attack him if it doesn't jerk back when he strikes. 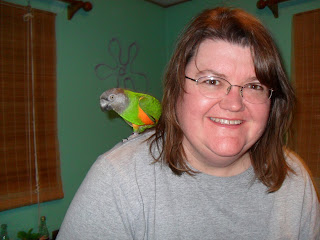 As he was sitting on my hand he did a little flap and jumped up onto my shoulder.  He is so light weight that I could hardly tell he was sitting there except for the claw he was using to hang on.  We hope this means he totally trusts us now.
Posted by ~*~The Family~*~ at 10:17 PM