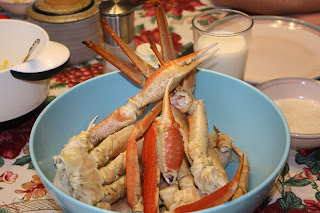 Every New Year's Eve we have crab legs and frozen corn.  I don't know why the frozen corn except we did it once and now we just pull it out every year.  This year, since Dad had to work, we had them for lunch.  Oh, they are so good I wish we could afford them more than once a year. 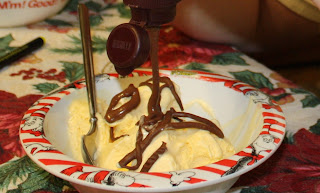 When we were at the store picking up the crab legs I told the kids to pick out what snacks they wanted and ice cream and Reese's shell made it into the cart.  It is cool how the topping freezes solid and you can pick it up.  We also had chips, crackers, puffcorn and dip.

We watched four movies.  Started out with Sword and the Stone and Little Mermaid, both of which we hadn't watched for a few years.  I kept looking over and expecting Dancer to be about eight years old when Little Mermaid was on.  It was a joy to watch it again.  We also got Despicable Me, bought by Spark with his Christmas money, in before midnight.  That is one funny movie.  I was surprised, I thought it looked kinda lame from the commercials. 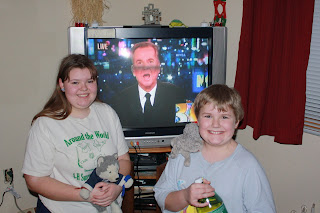 At midnight we took a break and watched the count down with Dick Clark.  Not the most flattering picture of Dick Clark. 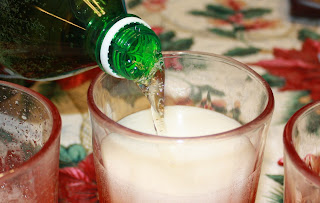 We celebrated with some bubbly, Ginger Ale that is.  I love Ginger Ale, we should buy it more often. 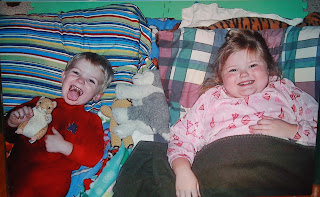 The last movie was Hercules that end about 2:30 in the morning.  Spark didn't make it that long.  As is our tradition, he made a little camp in the living room and fell asleep.  Here are the kids on New Year's Eve I think when they must have been three and six years old.  When Spark was little, every time we were going to take his picture he would stick his tongue out like that.  We would have to take a couple to get him to keep it in.

Today, New Year's Day, Dad slept, Spark and I played some Wii, did chores and listened to music.  Dancer, not feeling well, sat with a bucket most of the day.  She didn't need to use it thankfully and tonight she is feeling better.  Spark wanted spaghetti hotdish for supper so we made that and had it in the crock pot ready for supper when Dad got up for work.  No big excitement here.
Posted by ~*~The Family~*~ at 11:52 PM

Happy New Year!
I hope Dancer feels better soon. I've had kids passing around a mild virus since after Christmas.
So funny about Despicable Me. Even though my son insists it's a keeper, I want to see it before I commit to buying it. I have it on hold with the library. Maybe I'll get to see it in a few months! :o)