In August and September this dish is on our table a least a couple of times a week.  We just take whatever we have gotten out of the garden, which this year isn't much, and whatever else people have been generous enough to share with us and fry it up in a pan. 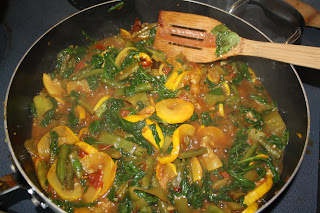 I put in a little oil, either olive or butter, and then cook the veggies until they are soft.  This time it was tomatoes, Hatch New Mexico Peppers Grandpa Jerry brought back from his last trip to Arkansas, yellow zucchini, green beans, garlic, basil and few handfuls of spinach.

Once it all cooks down I had a few tablespoons of this stir fry sauce.  Dancer loves this stuff and would eat it every day for lunch and dinner.  She even gets a little panicked and asks when we will getting to town to the store if the bottle looks like it is running low.  Along side the stir fry I have sour cream and Parmesan cheese for Spark and I who like a little extra oomph on ours.  Dancer is a purist and eats it plain and Dad will on rare occasion put a little tiny dolp of sour cream.

I think what really makes this dish good is that we know that it is seasonal and the later in the season it gets the better it tastes.  We could make it all year but the produce just doesn't taste the same bought in the grocery store in the winter and it would also be very expensive when zucchini the size of your index finger are .79 cents a piece.
Posted by ~*~The Family~*~ at 9:38 AM

End of the (garden) year stir fry is the best! :) We've got to do that too here before everything freezes out. Gotta love MN...