State Fair - The Great Minnesota Get Together

And get together with others we did, over 111,000 of them on Wednesday.  We had to be there early, by 8:15.  Not knowing what the traffic would be or what snares we may come upon we left by 5:30 in the blessed a.m.  Early for us.  We were there, parked, and in the 4-H building by 7:45 so we had plenty of time.  At this time of the morning there aren't a lot of other people out roaming the fair grounds. 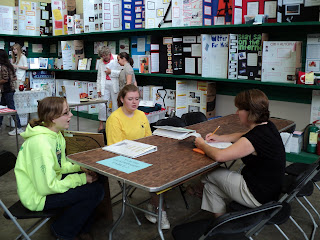 Dancer during her judging time.  We were excited that she would be in the first group and done early.  Her project category she entered was Youth Leadership and the judge wanted them to do a skill building activity first and then see everyone back at 11:30 to go over her judging results so we still needed to watch the time and be back to the 4-H building later.  Never had that happen during judging before but whatever. 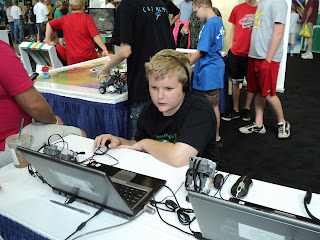 While Dancer was in her judging Spark did some of the technology activities set up in middle of the building.  Here he was learning how to program a robot.  He looked so serious. 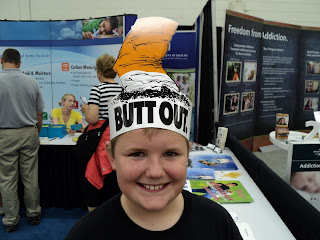 We checked out all the displays in the open exhibits and the education building.  This struck me as odd that you would have kids walk around with smashed butts on their heads.  Seemed more like you should have to wear it if you caught smoking, like a dunce hat.  We snapped the picture and he left it on the table for someone else.  I never did see anyone wearing one. 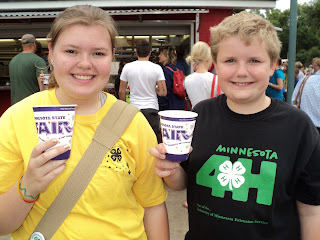 We all enjoyed the all you can drink milk.  A dollar for a cup and you can go back as many times as you want for chocolate or white milk served by dairy farmers from around the state.  Dancer also had her coveted cinnamon roll.  We all enjoyed a deep fried curly potato and Dancer, Spark and Dad had pizza, something we don't have anymore since we have cut down on our carb consumption. 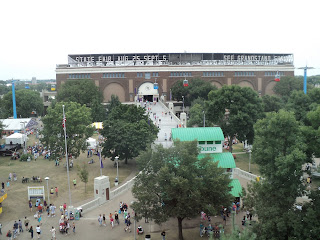 Spark and I climbed to the top of the fire tower at the DNR building.  Long way up, long way down. 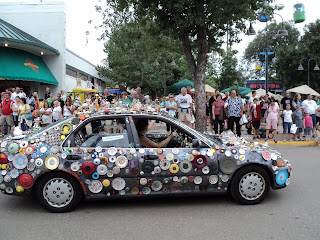 We were in the right place at the right time for the parade.  We have missed this every other year.  This car had plates fastened all over it.  We just had hail damage to our car and have to have it fixed but I thought maybe we could just do this instead so the dings don't show. 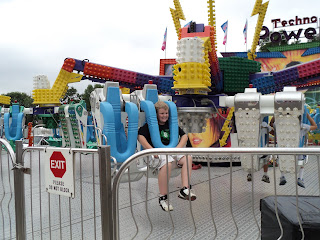 Spark went on lots of rides.  Notice he is the only one of us on the ride, that is because the rest of us don't do rides.  Watching him on this one made my stomach do flips.  Grandma Pat was super nice and bought the kids each a pack of midway tickets, something we would never buy because they are so expensive. 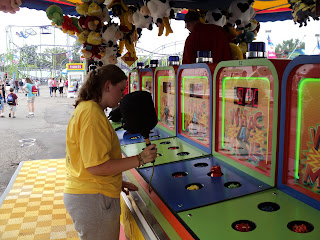 Dancer used her tickets to play carnival games.  She ended up winning a little stuffed bird with all of her tickets. 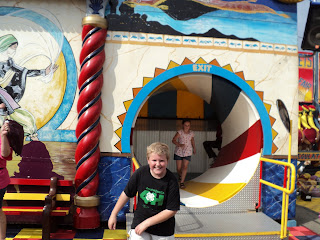 Spark coming out of the crazy house, his face tells the story of how fun the day was.

It has been two days and we are all still tired and sore from all the walking, we must have walked for about 10 hours.  By next year we will be good to go again, perhaps we should have a state fair boot camp to get ready.
Posted by ~*~The Family~*~ at 11:12 AM