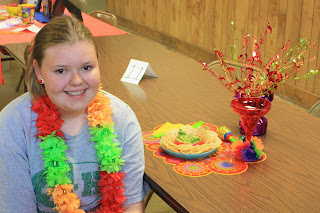 Dancer with her place setting.  She took a first place in her age group.  Her theme was National Guacamole Day, which is September 16th and she did a fiesta place setting.  Her menu was:
appetizer - guacamole with chips (this is what she showed served)
main dish - chimichanga with shredded lettuce, tomato, refried rice, cheese and sour cream.
desert - melon medley
beverage - margarita
This was our first  year doing this project and so she wasn't sure what the judge would want to know.  They asked how to make a chimichanga which she didn't know and what was in a margarita, again she didn't know.  I don't even know what is in a margarita, but the glasses are cool so she used it for her place setting.  She focused more on covering all the food groups and what nutrients she had in the meal. 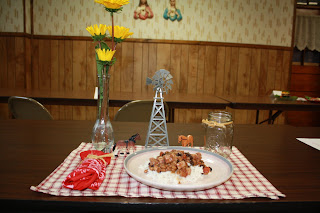 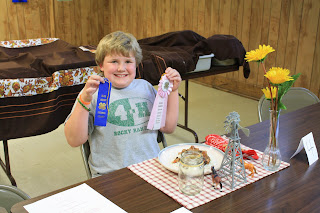 In his age group he took a first place ribbon and reserve champion.  This is first project as a regular 4-H kid, not a cloverbud which is the kids K-2nd grade, and he earns a Reserve Champion.  He was really proud of himself because he worked hard at making the dish which included chopping, mincing, sauteing and making rice. He also learned all the nutrients down pat so he could tell the judge.  The only thing he had off, and it was questions for advanced presenters not the younger kids, was how much a serving cost.  He said, "oh, probably about $20."  To add to his sweetness, he said that he wished Dancer had won the Reserve Champion instead of him because it would have made her so happy.  I told him they were in different age groups so he should being doing his best but that was the nicest thing a little brother could say.

They had such a fun time with this and are already thinking of what they are going to show next year.
Posted by ~*~The Family~*~ at 1:57 PM

I love it! What a great competition and their presentation was fabulous!

Kudos to Dancer and Spark!