I feel most days that our menus are boring and repetitive.  To combat this, the kids and I picked out some cookbooks when we were at the library the other day.  I often pick out cookbooks but don't often make anything new out of them.  I vowed this time to be different.
Our boring meals are also compounded by Dancer's food coloring allergy.  Some days I think how easy it would be to open a box of mac and cheese and throw it on the table in 20 minutes.  Not to mention the fact that we love mac and cheese, even more so now that it doesn't cross the threshold of our house.  The rest of us, beside Dancer, could eat colored foods but we try to make it as easy as possible for her to abstain from those foods.  It wouldn't be fun for her to watch us eat them and it wouldn't be  fun for us to have them knowing that she wants to be eating them right along with us.  We are certainly not deprive by eating those foods, we just need to be more creative not to fall into a rut.  I truly admire people who cook from scratch and avoid all processed foods that don't have a medical reason to do it.  In some European countries these offending food coloring have been banned by law and companies (McDonald's and Oscar Meyer for example) have found other ways to make their foods.  I hope that that will become the same in the U.S. some day when more people realize how horrible the majority of the food we have to pick from is.
Now, on to our new recipe that was a complete hit and the kids even enthusiastically had the left overs the next day for lunch.  The inspiration for this recipe came from the book  "Simplicity from a Monastery Kitchen."  While it isn't exactly the recipe in the book, I tweaked it a wee bit, it is close and a little more Scandinavian. 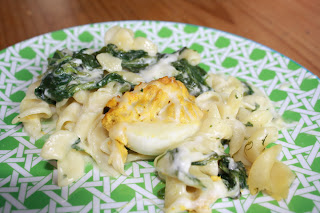 Slice the eggs in half lengthwise and remover the yolks.  In separate bowl combine mashed egg yolks, garlic, mustard, Worcestershire sauce, 1 tbsp. milk, salt and pepper.  Fill egg whites with mixture and place over the pasta and spinach.

Melt butter in sauce pan and mix flour into the flour. Gradually stir in milk and 3/4 cup mozzarella cheese. Stir continually over low-medium heat until a creamy sauce is formed and cheese is completely melted and not stringy.  Pour cheese sauce over the pasta and eggs.  Sprinkle 1/4 cup mozzarella over whole top.

Bake at 375 degrees for about 30-40 minutes until top turn golden brown.

This reheated well except for the eggs so eat those the first time you serve it if there is going to be any left overs.  The next day the reheated egg whites reminded me of what it might be like to bite into a flip flop.
Posted by ~*~The Family~*~ at 6:50 PM