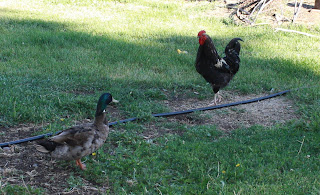 and it quacks like a duck and it walks like a duck, it's a duck.  However, this rooster is convinced that the duck is a hen.  His chicken is in the barn sitting on eggs and the rest of the hens are in the coop.  There is already a rooster in the coop so this one lives outside as the two roosters not bosom buddies.

When a rooster finds food he does this low, quick clucking sound and all the hens will run over to eat as he walks around gloating that he has brought home dinner.  Even when we feed the hens the rooster will do this like he "found" a buffet laying on the ground.  He is now doing this behavior for the duck, which is a male by the way.

Another thing roosters do is put down one wing and while dragging it on the ground will do a little hop dance around a hen to tell everyone that the chicken is his.  The rooster has been doing this to the duck too.

The duck doesn't seem to mind the gender, species mix up, he follows the rooster around the yard.  He is probably lonely, until a few nights ago we had two male ducks but we found a pile of feathers back by the pea garden and the rest is history.   Last night I was up about 4:00 a.m. and there was a heavy stench of skunk in the air so I was thinking that perhaps there would be no ducks this morning but he persevered.

So until the hen comes off her nest and her babies are grown to where she sends them off to fend for themselves, or the duck gets attacked in the night, we will have this odd fowl relationship in our yard.  We actually don't even know if the chicken is sitting on anything or she just needs a few weeks of R&R behind a feed can.
Posted by ~*~The Family~*~ at 9:38 PM

I love this story. It's so crazy to think of a duck-chicken bond!
Stacy

I thought we were the only ones will wild and weird animals.