We were watching 19 Kids and Counting the other night, which we have to watch late because it is on the first time during Biggest Looser.  On the show the Duggars had taken a trip to Washington D.C. and were eating at a pizza place.  It looked so good, and they were all going on about how yummy it was, that Dancer, Spark and I got a hankering for pizza.  Not having any pizza in the house, we were forced to be creative to get our pizza fix.  Spark suggested we take toast, put on sauce and cheese and put it in the microwave until the cheese melted.  No good, we thought, the bread will get soggy.  Next idea though was winner.  We made up Pizza Nachos. 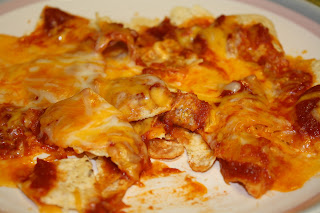 Dancer lined a plate with one layer of tortilla chips and sprinkled cheese on top of them.  She melted the cheese in the microwave like regular nachos.  When the cheese was melted she drizzled left over spaghetti sauce over the top of them.  Oh were they good!  They are going to become a staple late night snack food at our house.
Posted by ~*~The Family~*~ at 8:11 PM