Dad's brother is a cook at bar/restaurant place.  They had a problem with cats, way to many cats, hanging out in their dumpsters.  It made me think of that book "Millions of Cats."  The owner made the decision to get rid of them.  There was one cat that was friendly and would come up to Dad's brother to get tidbits and be petted.
Grandma called and asked if we would save this cat by taking it in.  One more pet our house really doesn't matter so I said to bring it over.  They caught him in a live trap with the alluring aroma of tuna.
Spark was out of his mind with excitement about this cat.  He made list of names.  Looked at pet lists of names on the Internet.  We voted on names.  Spark made more lists of names.  We finally all agreed on the name Raggles.
Grandma brought Raggles over and we got him in a rabbit hutch.  He lived in the rabbit hutch for a few weeks until he wasn't scared out of his wits and hiss when we would come out to feed him.  We got him into a cat carrier and took him to the vet for a rabies shot.  Even if he ran away, I don't want a rabid cat anywhere around our house.  We get to the vet and she reaches in to the carrier, pulls him out, he purrs like crazy, lets her check him over, give him a shot and treat some ear mites.  Encouraged by his behavior at the vet, we got home and let him out in the garage.  He was gone like a shot behind some boxes.  We kept him the garage for another week or so and finally got him to come out by only leaving food down for him if we were in the garage.  He got pretty friendly this way.  Finally, we left the garage door open and let him come out.  He was still timid for a few days but has become less skittish every day.  He has since made his home in the hay stack or the barn.
A couple of days ago we could hear him meow in the other garage but couldn't figure out where he was.  The next day we hear him meowing again and took a better look around for him.  He had some how crawled up into the eaves of the garage and was stuck there.  One of our other cats, Vidalia, doesn't like him one bit so she probably chased him and that is how he got up there in the first place.  We thought we could lure him down with food. 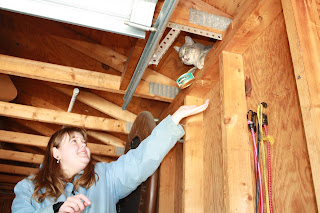 Dancer got out the ladder and climbed up to offer him a can of cat food to see if that would get him to come out. 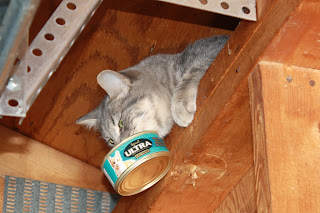 He was so hungry he snagged his nail on the rim of the can, held it there and ate out of the can. 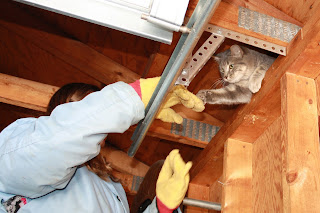 After he had had a little, we thought he would follow the smell of the food down.  Nope, he still didn't move.  Dancer tried to get him out, he reached out to her but he was still stuck in there. 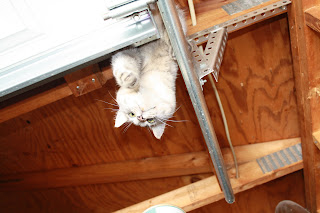 Finally, he managed to get himself out and on top of the open garage door.  We put the cat food on the top of the car thinking he would jump down to eat it.  He just couldn't make himself jump the two or so feet to the car. 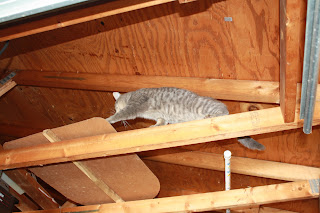 He back tracked and went over the rafters to the middle of the garage. 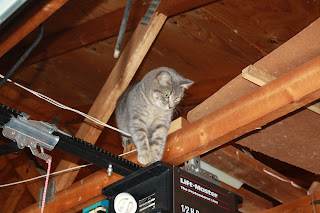 He got on top of the garage door opener and still couldn't make himself jump onto the car.  All the while we are waving the can of cat food around to intensify the smell so he would jump. 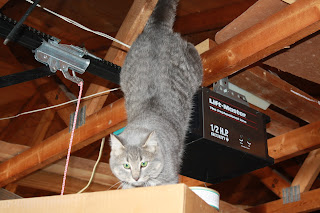 Dad saved the day by thinking of putting a box on the top of the car for him to climb down on and he was brave enough to get down.  He is like a cat afraid of heights.  I didn't know there was a cat out there afraid of heights.  I wonder if we had started chanting "JUMP, JUMP, JUMP" if that would have gotten him to jump. 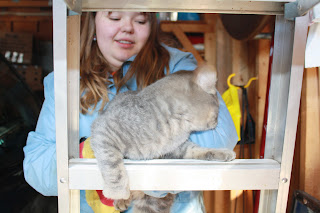 Dancer scooped him up off the car and brought him down the ladder.  He was still scared as you can see him hanging on for dear life on the ladder. 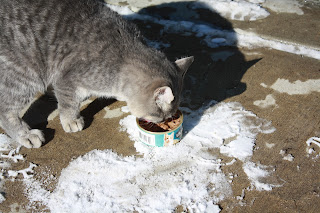 He's adorable! My family knows I have a weakness for gray cats. I would have rescued him too. :o)

I've never had a cat afraid of heights, but I've had plenty that couldn't climb to save their life. It really makes you think how even the smallest animal is a special creature with its own personality, weaknesses and strengths. :o)

He is a very pretty cat and hopefully both you and the cat will be blessed with your decision to add him to your family.