Watch where you are going!

We were coming home from bowling yesterday afternoon on a township road and we see a car parked on the side of the road about a 10th of a mile away from us.  I thought they were probably checking their mail but they were on the wrong side to reach the mail box from the passenger side and it was MLK Day so no mail.  The car pulls forward and then backs into the drive way, a long one where you can't see the house from the road so probably about a quarter of a mile long.  Again odd, why would you back down that long of a drive way.  We were going along at about 45 mph, thankfully I wasn't going 55, and as soon as we get to the car it pulls forward into the road.  I put on the breaks and lay on the horn but we were probably no more than 20 feet from the car.  I said to Dad, "What should I do?"   As calm as calm can be he says "Put her in the ditch."  I swerve to the right and slam into the ditch.  Thankfully we had have tons of snow this winter and the ditches are full so we didn't roll.  The car though was just buried. This whole incident happened in less than a minute.   I took a deep breath and shoved open the car door as best I could and yelled over to the driver, "What were you doing?!!!!"  I was proud of myself I didn't swear and conducted myself in the respectable manner I wasn't feeling at the moment.  She rolls down her window and says "Sorry, I was looking at a deer and didn't look before I pulled out."  She finally says she will pay for a tow and do we have a phone or do we want her to call.   She can start calling as we can't find the phone book.  I trudge up to her car through knee deep snow and stand at her window.   She has AAA and they are closed because of the holiday.  I didn't even say anything, just looked at her.  She looks at me for a few seconds and says "I will try someone else and I can probably turn the bill in."   She finally gets someone and I go back through the knee deep snow to wait in our car because it is below zero degrees with the wind whipping.   Spark is so upset he is crying and crying.  I needed to get back out of the car so I could hug him and calm him down.  By now I am wet from my knees down.  The tow truck that was suppose to take 15 minutes took over 45.  I took down the woman's license plate number so she knew she couldn't leave, but she never got out of her car.  If I had caused the accident I would have been out of my car so fast and run over to see if everyone was okay apologizing in between every sentence. 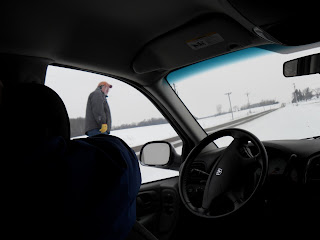 Dad looking to see just how far we are buried in the ditch.  He could barely get out on his side as he was on the passenger side where the snow was even deeper. 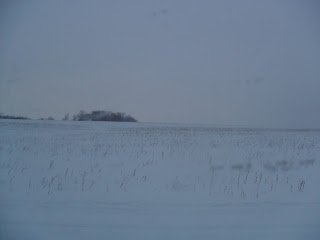 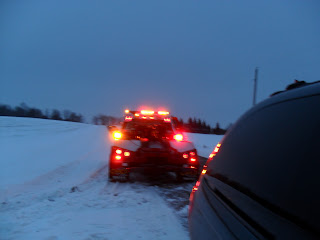 The tow truck that finally came.  He dug the snow out of our wheels but the brakes and the engine are firmly packed with snow.  We were less than three miles from home so thankfully the car drove and we didn't have far to go.  Tonight Dad will put it in the other garage and run heater with hopes that it will melt out. 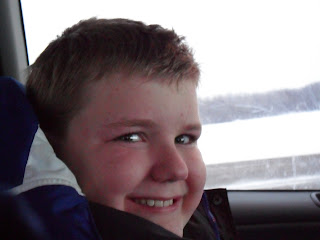 Spark after he calmed down.   I told the woman, as she was calling for the tow truck, that I would have hit her on the passenger side door and she probably, at the speed we were going, would have been killed if not all of us.  At the least both cars would have been totaled and we would have had serious injuries.  She did say yes she realized that but there was nothing she could do about it now.  No, I am sorry or are you going to be alright, is there anything I can do while we wait.  Nothing.  I just hope she learned to look from now on when she pulls out on to a road.

Tow truck got us out and I said "She'll pay you" and we drove off.  Dad had to work last night so we needed to get home so I could start supper before he left and now he didn't get a nap in.  He and I had sore shoulders on the side that our seat belts were and the kids were fine.  Today we both feel better.

One good thing that did come from it is the kids will know first hand that when they start driving to be alert.  It also reminded us how quickly our lives could have changed and we thanked God that they didn't.
Posted by ~*~The Family~*~ at 12:01 PM

This is one reason I sometimes think drivers should be required to take an IQ test when they renew their licenses.....

I am so thankful to read that you are OK. Scary situation.