I took the kids to a parade today and we set up our chairs along side the road to wait for it to start.  I set mine down and Dancer put her's to the right of mine and then I said to Spark, "Come sit over here by me."  "Sure" he says, "you can be the monkey in the middle!"  I told him if I was the monkey then they were the cuckoos and I took a picture of both the cuckoos from my monkey seat. 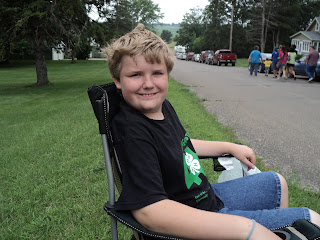 Cuckoo to the left. 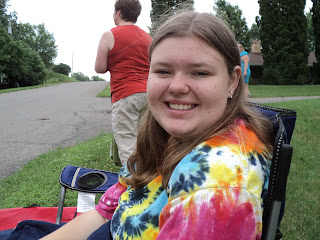 Cuckoo to the right.
It looks like there isn't hardly anyone else watching the parade in these pictures and that is because there wasn't.  There is a lot of road construction in town and this was the only way they floats could get out of town without having to make a bunch of turns.  This is a new route and so on the whole street, which spanned about five blocks, there probably wasn't more than 40 people.  Can you say candy galore?  We didn't walk downtown but there must have been a ton of people down there because it took a while to get out of town and a sheriff was directing traffic.  I have never had such good seats at a parade before and probably never will again.  Plus, we parked two houses down from where we sat!
Posted by ~*~The Family~*~ at 11:08 PM