The plan was to get up early and go to the after Christmas sales.  That was until Dad was able to get a cut at work and we knew he would be coming home early.  Great, except that "early" turned into 2:00 a.m. before he actually got home.  If all had gone well at work he could have been home by midnight.  Since we hadn't hardly seen him all weekend the kids wanted to stay up to see him.  He kept calling every once in a while and giving us the up date on how he thought he would be able to leave in half an hour.  By the time finally he did leave and got out to his truck he saw that he had left the dome light on which had drained his battery.  He had to call hospital security to come and give him a jump and then wait for the battery to recharge.  Finally at 1:39 I told the kids to get to bed.  Dad got home around 2:00 and by the time he relaxed and we talked a little bit it was almost 3:00 a.m.  When I got this morning around 10:00, both the kids were still slumbering.  So much for early morning shopping.
Since we missed the early morning shopping we decided that we would go geocaching first.  The temperature hit 50 degrees, and we still don't have any snow, so we decided it was best to take advantage of the beautiful weather and be outside while it was light out and we would shop after 5:00 when it got dark. 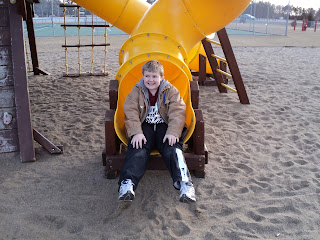 Spark takes advantage of every play ground we find a cache at.  He says that he is the decoy so no one suspects we are geocaching and he needs to "take one for the team."  Isn't that giving of him?

We did find a few good deals still at the stores.  We hadn't bought wrapping paper for probably over eight years and now we won't need to buy any for another eight years.  Also found some door prizes for a 4-H banquet and some trinkets for next years Christmas boxes that we send to missionaries in Mexico that they hand out to local people as a way to bring up Jesus and witness to them.  Spark also got the advent pack of Lego mini figures.  It was $40 before Christmas and today it was just under $20.  Dancer also scored a pair of fuzzy pajama pants.  Even if we had been there at the crack of dawn we probably won't have found any better deals and tonight there was no crowds which I heard from other people were crazy in the morning.
Posted by ~*~The Family~*~ at 9:51 PM