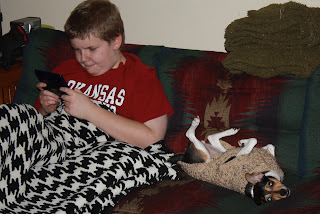 When Spark was playing a game, look how hard he is concentrating, Nikki laid by him on her back the whole time probably hoping for a little tummy scratch.  She only turned to look because she heard the camera come out.

See how her eye glows blue?  We just learned about that today when we were studying owl eyes and here it showed up on her picture.  What makes animals eyes glow is the tapetum lucidum.  What that is is a reflecting pigment layer lying behind the visual receptors of the retina of certain mammals (e.g. cats, dogs), birds and fish, which gives a shining appearance to the eyes when illuminated in the dark.  That sounds fancy because I lifted the definition from the Dictionary of Optometry and Visual Science.  The purpose of the tapetum lucidum is to bounce the light around in their eye and make it seem lighter/brighter out than it is so they can see in the dark.