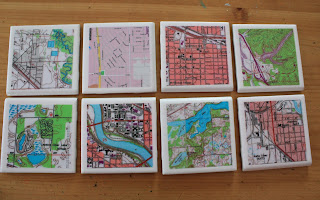 For the hard to shop for we made these topographical coaster tiles.  These are for Grandpa Jerry and they are all the places that he has lived.  Conveniently, he has lived in eight places not counting residences between his parents house and getting married.  I love how these turned out.

While it took a long time to make these they were relatively inexpensive.  The maps we got off the Internet.  Zeroing in on places on the maps and making them a size that would be a good size and show detail on the tile was the biggest challenge.  That took the most time.  Then we just cut them out and put them on white tiles that we got at the hardware store.  We decoupaged them to the tile and added about ten coats to each one so they hold up to wear and tear.   On the backs we put little felt circles so they won't scratch whatever they are sitting on.  For the record, those little felt circles are called the obvious - Surface Guards.  Good to know so that you won't have to go to the store and explain to the salesman that you want these little circles and try to explain them to have him say they have the very descriptive name of Surface Guards.
Posted by ~*~The Family~*~ at 5:13 PM

Since we have had 15 moves around the country (thanks to Uncle Sam), I am going to keep this idea for later.