Why You Gotta Be So Mean? 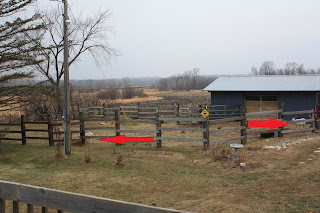 Calliope that is.  Now that we think breeding season is over we let Nico out with Lola and Calliope in the corral.  While Calliope will let her daughter Lola eat with her without knocking her around, she won't let Nico.  Nico isn't her son and she isn't about to let him eat any of her food.  She is on end of the right arrow and Nico is on the end of the left arrow.  We can feed them separtely but Calliope wants both of their hay rations so she run back and forth butting Nico away from the food and then runs back to her food, back to his to give him a head butt and so on.  What you can't see in the picture on top is that Nico has a body guard. 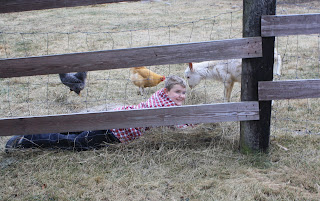 Spark sits out there with Nico so that he has a chance to eat.  Calliope knows that she can't butt us around so she stays over by her own food minding her own business.  When they aren't eating they get along fine.  By next year, when Nico is full grown, it will be a different story.
Posted by ~*~The Family~*~ at 10:25 PM