Making Some Changes Around The Barn 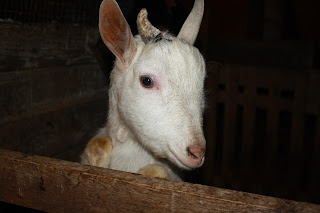 We finally sold our buck Klaus.  We had a hard time selling him because he had horns and people don't seem to want a buck with horns.  We sold Charlie, another buck that was dehorned, and could have sold several more just like him a couple of months back.  Klaus was a good gentle buck, the only problem was that he was related as either a dad or a brother to all but one of our girls.  He had already been with Calliope, the one goat that we know isn't related to him, and possibly our other doe so we will get one more year of off spring from him.  I was really sad to see him go, we had had him for four years and I like to give him snacks and rub his freckled nose.  The buck above, Nico, is named after Nico de Angelo from the Percy Jackson books, which I didn't know Dancer named him after a book character until tonight.  He is the one we are going to use next year and hope he does a good job.  Klaus is his dad but he doesn't share a mom with any of our does.  He has a scur from being dehorned so I think he looks like a unicorn. 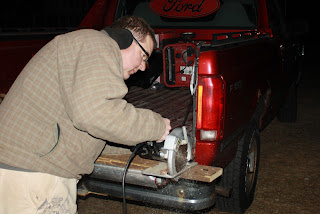 Now that Klaus is gone there are going to be some new "house" assignments in the barn.  When he was in rut he would try and get out of his house to either let the other bucks know that he would be taking care of business or to try to get close to a doe.  Every time he would break through we would just do a quick patch job to keep him in his house to deter him from getting into any trouble he thought might be of interest.  He had the deluxe suite house, it was about 10 X 18 feet, pretty nice for one goat.  Dad did a little sawing 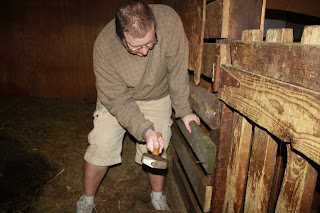 and hammering and now it looks good as new. 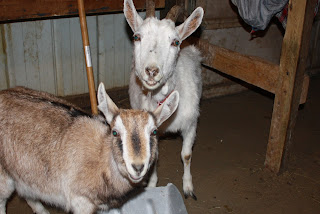 These two, Calliope and her daughter Lola, are the new residents.  They had made such a mockery of their house that we didn't even bother to shut their door anymore and they have been having free reign of the barn the last few months.  Lola is very, very smart and smart goats can make huge messes and are danger to themselves as they try things they shouldn't. 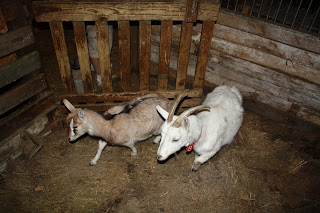 While Dad was fixing their new house they just couldn't wait to get in there, we had to keep shooing them out.  Once it was done, they ran in and we shut the door, it was a much different story.  They were thinking more along the lines of an open house not signing a lease.  They will adjust and they are never that happy anyway.  If they are outside they want in, if they are inside they want out, outside a pen they want in, and so on. 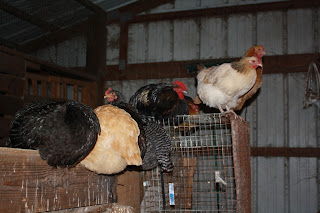 The next goal is to fix the chicken pen that is in the barn.  There have been goats in it for the last couple of years and so they just roost along this wall. 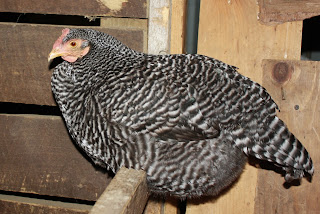 Only problem is we never know where we will find their eggs and they poo all over. 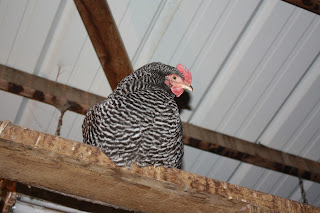 Some roost in the rafters so it is always a good idea to look up before you walk right in so that they don't drop a little bomb.  It has happened before and it isn't pleasant.  You can't just rinse that stuff out of your hair, it takes a whole shower and even then you feel a little um, shitty. 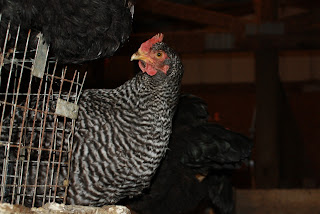 Another Speckly wondering what I am doing with the camera.  Looks like she is giving me the stink eye. 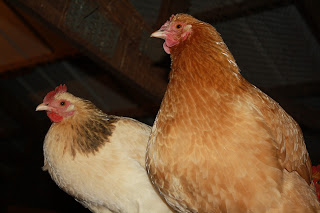 Two other beautiful ladies.  I just love chickens, they are so soft. 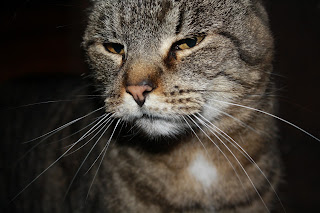 Vidalia was also out there snoopervising the goings on.  Looks like she is really scrutinizing Dad's work. 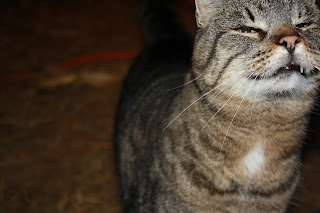 She ended up with this big smile on her face so she must have approved.  I never did get her whole head in a picture because, as I was trying to take her picture, she kept trying to get closer for some pets and ear scratches.  She is a funny cat, she reminds me of a dog in how she acts.
Posted by ~*~The Family~*~ at 1:25 AM