When Dancer was born I decided that I just couldn't leave her at a daycare and let someone else have fun with her all day while I was working.  I also worked a job that had a lot of evening obligations and I was out of town 90% of my work time which didn't work the best with a baby and nursing.  Since I needed to have an income, I opened an in-home daycare and had fun with other peoples kids while they were at work.

I liked to have kids in sets of two that were the same age, so I would have two four year olds, two three year olds, etc.  That way they had a playmate that was at the same development level as they were.  This is the girl that was the same age as Dancer.  She came to us when she was just about two and stayed until she went to kindergarten.  I actually had three kids Dancer's age because I started a boy, Alex, when they were a babies.  He and Dancer were inseparable, even spending a lot time outside of daycare hours playing but, I wanted a girl for her to play with too.

When we moved we lost touch with Alex but a few years ago we found that this girl also moved out to our town.  Today we finally had schedules that worked and we got together at the beach.  She's not so little anymore, she's taller than I am but, she is still as cute and sweet as ever.  They did live on the road behind us and so once in a while she would still come over and play until we moved but we didn't see her very often. 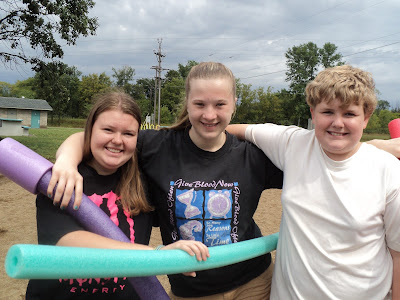 Spark was only two when she started kindergarten so he doesn't remember her from daycare, just from stories and now when we see her around town. 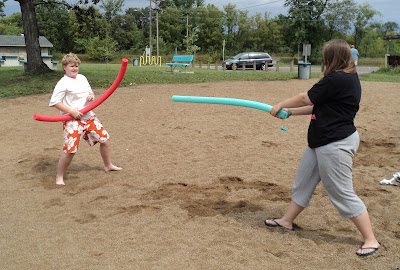 The noodles were no sooner set down on the sand and they started playing Ninja warrior with them. 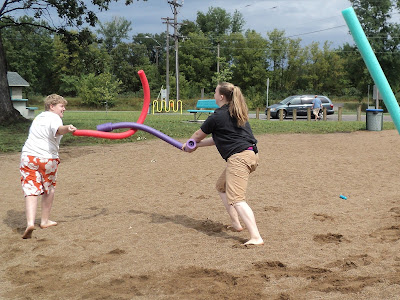 You would never know they hadn't played together for over seven years. 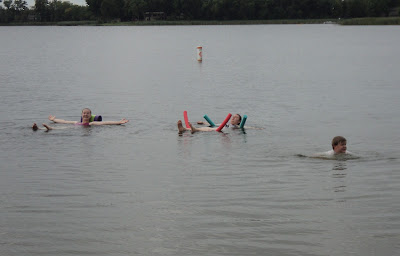 They lounged in the lake. 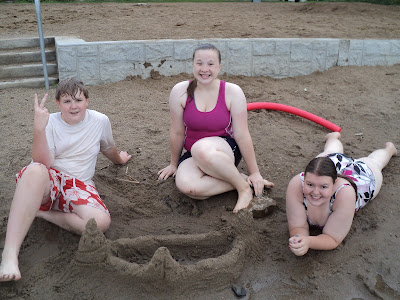 Built a sand castle for princesses. 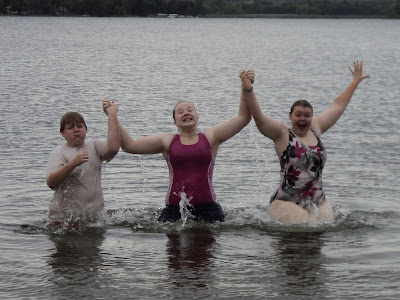 Played in the lake some more. 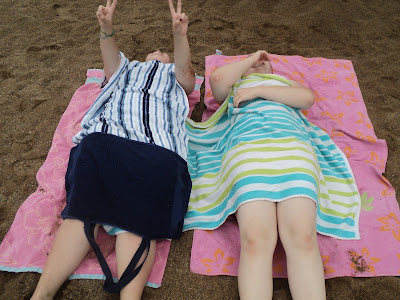 Worked on their suntans.  This is what suntanning looks like when it is 65 degrees and cloudy.  It was a fun day, hope we can do it again. 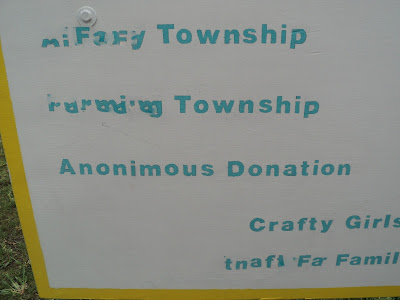 As we were leaving we checked out this sign.  The beach was just totally redone and the town took donations to help pay for it.  To thank everyone they put up a big sign with the donors names on it.  We had to wonder if the anonymous donors wanted to be so anonymous that they didn't even spell anonymous right.  That is the problem with signs, no spell check.
Posted by ~*~The Family~*~ at 9:59 PM

So fun to hang out with old friends! How cool you got to spend time together!! And suntanning when it's 65? Brave souls!!