Every year several environment groups (County Soil & Water Conservation District, DNR, County Parks, a university, local sportsman's clubs, businesses and others), get together and offer a free hands on day at a park.  This was the first year we had gone and now we wished we had known about it in previous years. 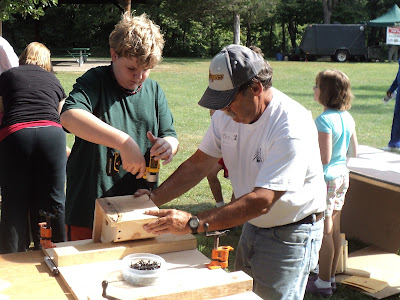 There were a few make it and take it activities. 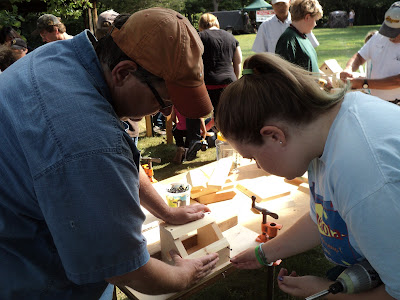 The pieces were all precut so all we had to do was screw it together.  Dancer loves to use the nail gun for any project she does but, in this setting the screws were probably safer. 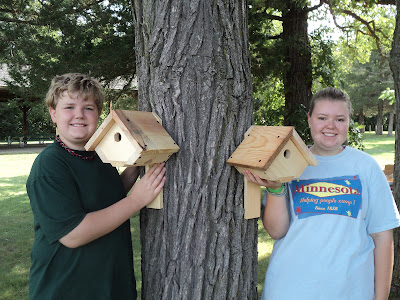 We should have at least two happy birds in our yard next year. 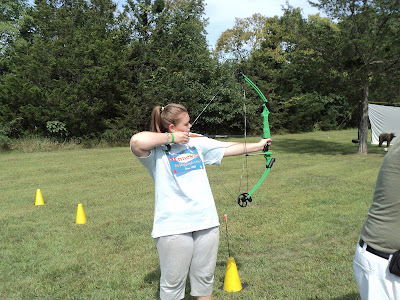 They got to try archery, Dancer's second time but this was Spark's first. 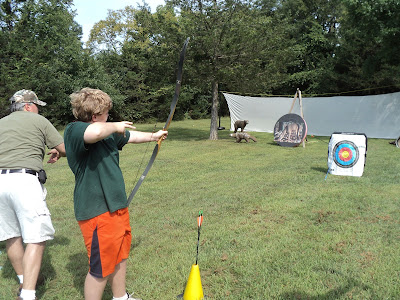 They guy helping Spark said, "He shoots a gun doesn't he?"  I guess archery aiming is different that aiming a gun.  They only got to try six arrows.  The guy said to get back in line and they could do more but, the line was quite long and we didn't want to wait and miss the other activities. 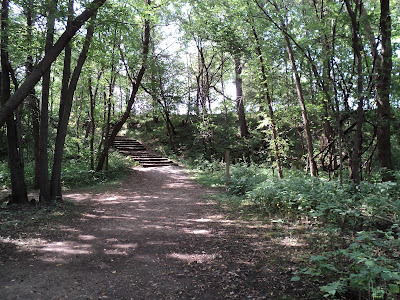 Along the Mississippi, this looked like a movie set to me.  The perfect setting for a sword fight. 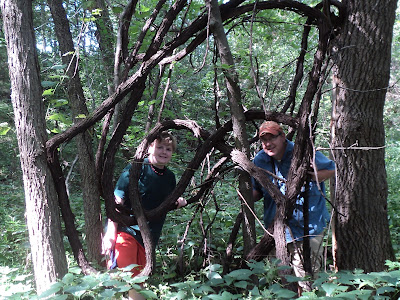 This vine reminded us of those cut out board where you put your face in.  Glad I was the one taking the picture because both Spark and Dad spent a lot time after this scratching their legs.  There wasn't any poison ivy or burn weed so not sure what those plants were, either way Dad and Spark are both highly allergic to them. 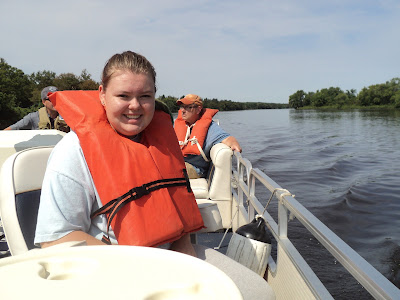 A pontoon tour to learn about bank erosion. 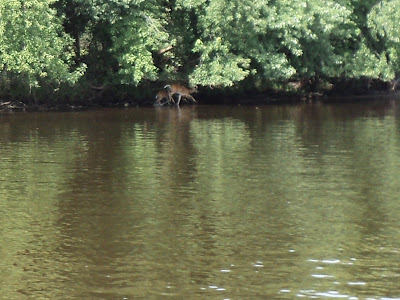 We got a bonus on our tour, a mother deer and two fawns.  Almost every time we are in the car at least one deer runs in front of us, no different when we are on the water. 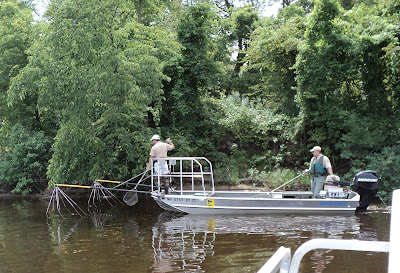 We got a second pontoon ride to learn about electrofishing.  The first part of the demonstration going along the river follow this stunboat.  The booms in the front are the electrodes that stun the fish for up to two minutes.  Those two guys watched for fish and then scooped up different fish species.  It was amazing how many fish they got and how many more were jumping in the water.  Now, if we were on the side of the river fishing we would be lucky to get a few little ones.  On a side note, there was a booth set up to test if you knew how many fish of each kind was the legal limit.  I told the lady how funny that was because we have never had to worry about such a problem.  She also asked how many Northerns you can have over 30 inches.  I told her if I caught Northern that was 30 inches I would probably get it mounted not eat it.  Actually, when we fish we usually don't keep the fish because all the lakes have recommendations on how often you should eat out of them.  The Mississippi is no more than once a month.  Um, no thanks, we will go with the recommendation of never.  We are pretty close to the start of the river and I wouldn't even swim it much less eat from it. 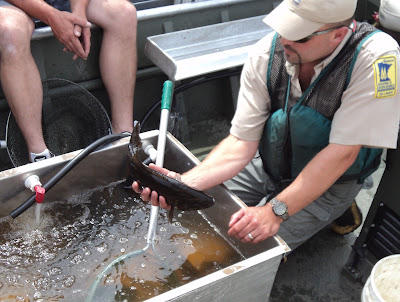 After they were done with the electrofishing demonstration, the two pontoons pulled up to each side of the boat and they went went through all the fish in their live well. 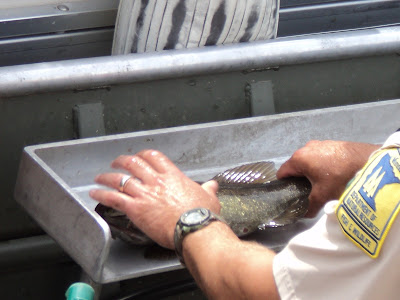 We also learned the proper way to measure fish, again, never had a fish that was worth measuring but, who knows, maybe some day that information will come in handy.  We can hope anyway.  This is one of the main reasons we went to this event because this would be Dancer's dream job and she wanted to see the demonstration. 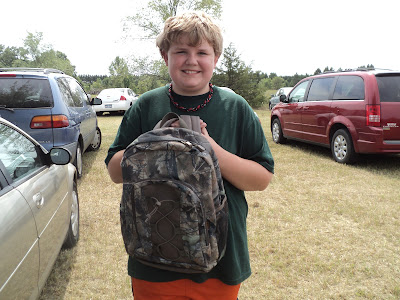 At all the booths and activities all the kids under 12 got a ticket.  When they collected six tickets they could turn them in for a prize.  When we got up the booth that had the prizes they had a wheel that you spun to see what prize you got.  As we were walking up a kid was walking away with a duck call but the table was full of bag of chips.  I thought it would be cool to win a duck call but it would be great, since we were hungry at this point and the next thing we were going to do was eat lunch, if Spark would win a bag of chips to go with this sandwich.  I figured the rest of the prizes would be bouncy balls or some other little plastic trinket.  Spark got up there and spun the wheel and it landed on backpack.  I thought, and he said later that he thought too, that it would be one of those nylon bags with the drawstring top.  No, it was a full size canvas backpack.  They had tons of other great prizes too.  Very generous on the part of the sportsman club that donated all those prizes and then manned a both all day to give them away. 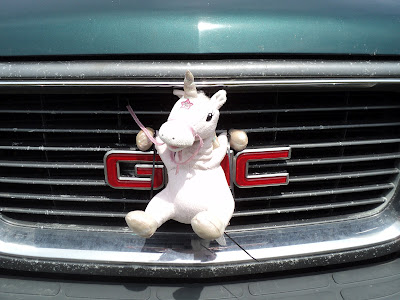 On the way to the car for lunch we saw why unicorns are extinct. 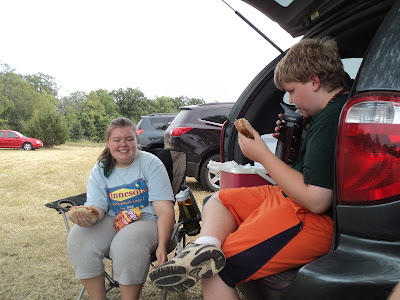 We pulled out our lunch and lawn chairs and pretty soon a lot of other people started to do the same thing.  It was a long way to the picnic area and they must have thought the same thing and if those crazy people are doing it, we will too. 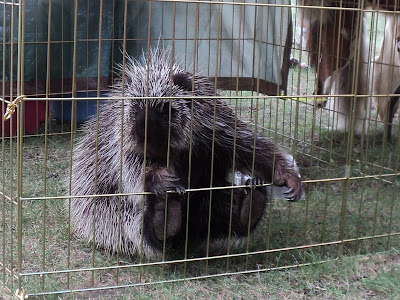 There was a program called "Wild Animals Everybody Loves To Hate."  The point was to tell us that these animals are really not what people think they are.  That was all well and good until the presenter said, "But don't get any closer than four feet to the porcupine, we don't want to agitate him." 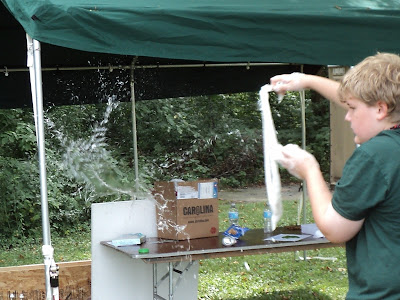 This was station about water and one of the activities was making huge bubbles.  Here I just happen to catch a bubble right as it was breaking.  When they broke it was so fast that you never saw this so it was cool that the camera caught it.

The event was six hours long and it took us five hours to look at everything.  Good return on our entry fee of $0.00.  We are already looking forward to next year.
Posted by ~*~The Family~*~ at 12:28 AM

THAT looks FUN! Especially the electro fishing thing. How cool is that? Next year we are totally coming with you!