The place where the kids shot sporting clays this last spring/summer had a kids day this weekend.  There was free ammo, clays and archery.  The kids got in the line for shooting which was being manned by their coach and he was giving each kid the chance to shoot about 6-8 clays.  When our kids got up to the front of the line he went to eat and one of our 4-H leaders, Ken, stepped in to man the station and he let our kids shoot a box, 25 shells, each.  Normally he would have been coaching the kids during the season but his son had other things going on and didn't participate in the program.  He also fell as he was getting into his deer stand last fall and broke his back so that slowed him down this last year.  He is still in his brace but finally not in as much pain. 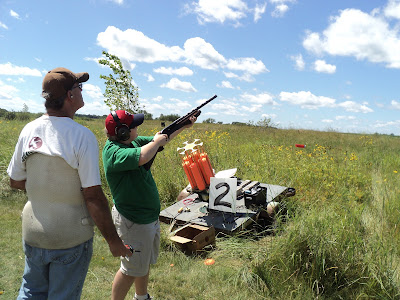 The kids were just on fire, Spark hit 20 out of 25 clays.  I liked this picture because you can see the shell flying on the right side of the picture. 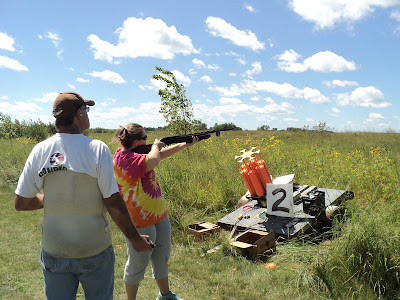 Dancer, she shot 23 out of 25.  I don't know if they had a better fitting gun, or if it was the middle of the day instead of evening, or if they just feel more comfortable with Ken manning the switch because they know him so much better.  Whatever it was, they both did great.  This is set up to shoot a report pair, which the kids just started the last couple of times they shot, and they still hit the majority of them.  I was glad they did so well because it was the only the second time that Dad has been able to go and watch and so they enjoyed showing him what they could do.  When they were done Ken asked if the kids wanted to shoot the course, which without hesitation they said they did.  We are thankful that he would take his Saturday afternoon to help them shoot a round.  We got back to the club house after the 2:00 ending time so they didn't get to try archery which Spark was bummed about.

The weather was perfect so we headed home to do some yard work.  Lately, because it has been so hot and humid, we have been heading out about 8:00 or 8:30 in the evening to mow and weed.  It was finally enjoyable to be outside and we have spent the better part of the last two days getting some much needed work done.  We also opened up all the windows in the house to let some new air in.  About 9:00 a skunk came through the yard and it was so strong that when Dad went down stairs to shower he said he could smell it down there.  Phew, thankfully it dissipated quickly.
Posted by ~*~The Family~*~ at 10:31 PM