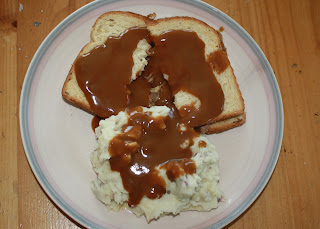 This is a lunch special staple in cafes and diners around here.  We just recently found out that the name "Beef Commerical" is only used in Minnesota.  The story behind the name starts out over 100 years ago when business travelers were more commonly called commercial travelers.  In those days, most people traveled by train, and right by the train tracks would be a hotel, often times called the "Commerical Hotel."  This was a dish that the hotel kitchen could keep warm all day and serve quickly when trains came in and people might only have a short lay over or want a good meal before retiring for the evening.

My mom's dad was one of these travelers.  He sold nursery stock, and although he had a car and didn't ride the train, I do know that he had a route where he stayed often over night in these hotels.  By todays standards his route would be small but, in those days, the 1930's, cars and roads were not what they are today either.

Two other possible explainations for the name of the substantial dinner was that it was made in a commerical kitchen or that they used commerical grade beef.  If I had to guess, I would go with the first definition of clever advertising to link the meal to what a commercial traveler would love to eat.

Throw a beef roast in the crock pot and cook until it is practically falling apart.  You can use instant mashed potatoes but it is best with real mashed potatoes with the skins left on.  Make a sandwhich out of the beef, meat loaf is a wonderful subtitution, and cut it in half.  In between the two halves put a big blop of potatoes and cover the whole thing with gravy.   No side dishes are really needed for this meal because, by the time you finish the sandwich, you will be way too full for anything else.
Posted by ~*~The Family~*~ at 2:06 PM