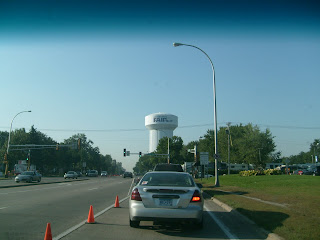 The day finally arrived! We left just after the crack of dawn and made the trip to the cities for the State Fair. After a couple hours of driving the State Fair water tower was a welcomed sight. You would have thought that this was us getting to the fair but no, it took about 20 minutes from here to get to the part where you buy a parking pass and the tickets to get in. Then another five for them to direct us to the parking lot and finally to a spot. Whew! 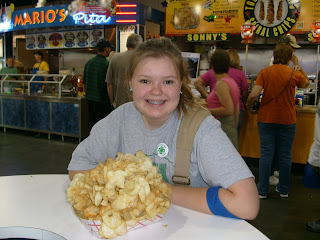 The first order of business was to find the 4-H building and where Dancer would have her judging, the second was to get something to eat. We were all hungry by now but not this hungry. Not knowing what we were getting, Dad ordered this deep fried curly potato extravaganza. He counted the potatoes as they were cutting and plopping them in a deep frier, this basket is five, large potatoes. The four us managed to eat not quite half of it. It was good though! 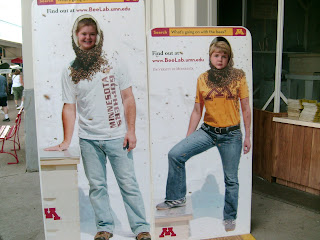 We stopped by the horticulture building and the kids tried out the bee display. 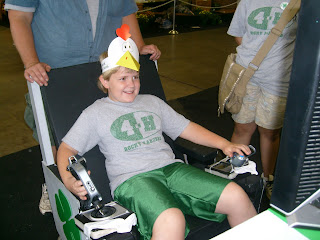 While Dancer was in her judging meeting, Spark worked on filling his science, engineering and technology passport. He flew a plane using a flight simulator.
. 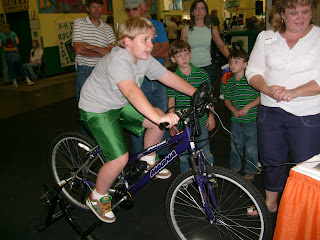 He used pedal power to run a fan on the bike, light bulbs and a few other gadgets. 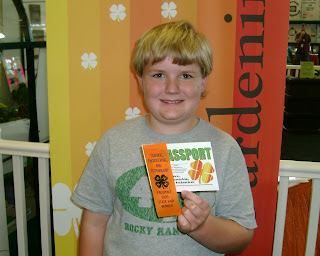 He also completed activities in the areas of gardening (telling by smell what an herb was), robotics, try science (computer programs to build windmills and forensics were the ones he tried - find the activities at http://www.tryscience.org/, http://www.powerupthegame.org/, and http://www.tryengineering.org/), and film making studio. After Spark finished all the activities and got his passport stamped, he was given an orange ribbon to take home and remember the day. 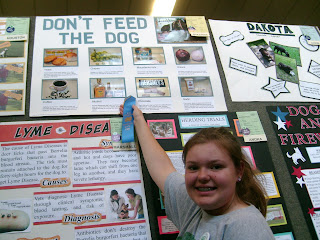 Dancer got a first place blue ribbon for her project. She is only five feet tall and they put her project on the very top row. She had to stretch to get the ribbon up there! The judging is different at the State Fair than at the County Fair. At the state level they are judged in groups of three or four. Each one gives a presentation of their project and then they ask each other questions along with the judge. Dancer had to give her presentation first, and since this was her first time and didn't know what to expect, she found it a little daunting. She did a great job even with her nerves! 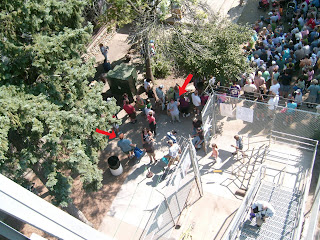 The kids climbed up to the top of a fire watch tower. It looked like way to many steps for the Dad and I to hoof up with our tired feet so we watched from the bottom and waved. We are the people at the end of the red arrows. We aren't standing by each other because Dad watched to see that Spark would be able to go all the way up to the top with out getting scared and stopping part way. He has a phobia of walking on those metal grated stairs that you can see through. He made it up and back down without Dad having to go up and coax him down to good old terra firma.
. 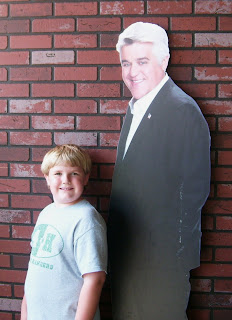 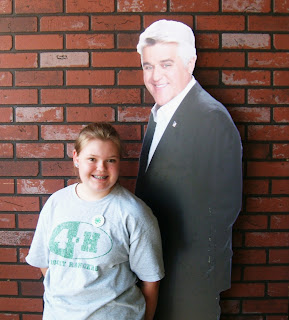 Dancer and Jay Leno. This was cut out display where you could take your picture with Leno, send it in to his show and someone would be chosen to be a guest on his show. They are probably looking for something a bit more dramatic in the picture to be chosen for the show so this is the only place to see them! 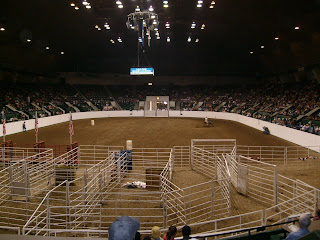 We watched some horse barrel racing in this huge arena. Dancer was hoping the picture could capture how big it was but while it looks big it was so much bigger. The Dad and I both went to the Shrine Circus in this arena when we were young. In grade school we lived over two hours apart from each other. It was fun to think that we could have been at the same circus show, could have even sat by each other. 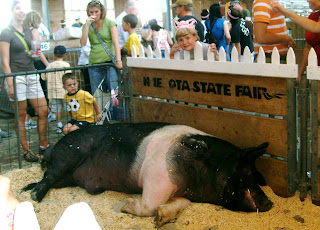 The biggest boar (not bore, we all know one of those) in the state 1,300 + pounds. Spark is in behind the fence behind and you can see just how big he was. He was an unreal kind of big, not just fat. Think of all the bacon laying there!

Other highlights were lobster on a stick, Nirto ice cream, a deep fried Snickers bar, a huge display of butterflies coming out of hundreds of cocoons, playing Wii fit, riding the Sky Ride (little pods that go on wires over the fair), picking out souvenirs, eating a super yummy cinnamon roll that we saw being made, all the 4-H projects, walking amongst to many people, the DNR fish pond, and stopping for supper on the way home so we wouldn't have to drive into the sun and be stuck in Labor Day traffic trying to get out of the cities. We got home, did chores, fell into bed and fell asleep instantly. It was such a great day we are already looking forward to next year if Dancer wins a trip!
Posted by ~*~The Family~*~ at 10:44 PM