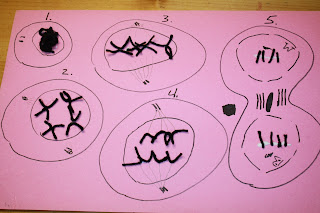 I made a poster for science today that shows how a cell divides into two cells. Cell division is also called mitosis. My dad says that mitosis is found on the end of his feetsis but that is just not true, it is found in cells. For this poster I used a cell that had four pairs of chromosomes.

Here is what happens at each step when the cell is dividing.

Step 1. Each cell has four pairs of chromosomes. When a cell begins to divided into two cells, each chromosome doubles.

Step 2. The nucleus prepares to divide. The chromosome pairs are connected at the middle and make an X shape.

Step 3. The chromosomes line up across in the middle of the cell.

Step 4. The chromosomes pairs separate into two individual, identical chromosomes and move to each a side of the cell.