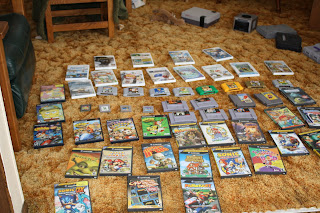 Spark is obsessed with video games. He has tons of them as the picture above shows. The problem is he is never happy with the ones he has and forever wants new ones when we go to the store. Which ever game he is looking at at the time is the one that he has wanted forever and his life just will not be complete without it. I want him to learn to be content with what he does have and not always looking forward to the next thing. I know he is young to figure that out but he will be happier in the long run so we don't indulge him too often unless he really, really deserves an extra prize when we go to the store. Another problem is that he wants the more expensive games that are between the 35 and 50 dollar mark. My idea of an extra prize is the $20 ones. Once they cost more than that they are birthday or Christmas size gifts not a "I have been toeing the line for the last few weeks" gift.

This leaves Spark to spend his own money on games if he wants to buy them. Problem here is, this is a boy who can not stand to have a dollar in his pocket. As my dad would say "If your right handed you should keep your money in your left pocket." He is slowly learning that you can only spend money once and then it is gone so he should be saving up his pennies not spending them first chance he gets. He will get there I am sure but it causes some frustrated moments for him now. To his credit, he is a very generous little fellow. If he sees something he thinks someone else would like he buys it for them. He even gave money once to another boy he didn't even know at the skating rink because the boy didn't have any money to buy a treat.

To help him along in his game quest, Dad told him he could do some extra jobs around here to make some extra money. This morning he said if he picked up all the cans that have not been taken very good care of all winter in the garage he would pay him a little bit. First this morning Spark was out there with a garbage bag picking those cans up so fast that he was a blur. This is the same boy who needs a fire lit under him just to get his dirty clothes down stairs.
Posted by ~*~The Family~*~ at 10:06 AM