Strike Anywhere, If only I could!!! 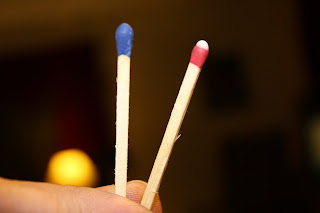 In the picture above, you can see a "strike anywhere" match on the right, the one on the left is the "strike on box" variety. When I was a kid we usually had the Ohio Blue Tip brand, that's the one on the left, on the right is an off brand I got at a convenience store in a small town. I snapped them up as soon as I saw them.

I imagine everyone has heard about the rise of the drug "meth" in our country, especially in rural areas. It is easy to think that "meth doesn't affect me". It is possible that some people in my area are involved in making/selling meth. No friends of ours are, as far as I know.

I can tell you some ways the war on drugs affects me with regard to meth. The phosphorous containing tip of the strike anywhere match is used in making meth. Stores are discouraged from selling these making them a rare commodity (that's why I bought them right away). Lye is used to manufacture meth and homemade soap. To get lye to make soap I need to travel 18 miles to store that still sells it, again stores are discouraged from doing so. If you stop at grocery, or convenience store to buy cold medicine that contains indgredients used in meth, you will find they are all behind the counter or in a locked cabinet in accordance with our state's laws.

These are small inconveniences I will admit, but that's why it gives me joy to strike my match anywhere.
Posted by ~*~The Family~*~ at 3:25 AM