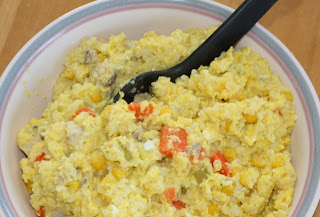 I seem unable to make a normal family size amount of soup. The other day I made rabbit and rice soup and it was very good. The next day we had rabbit and rice soup leftovers, and it was very good. After two meals there was still another meal of soup which now seemed boring. It was time, as they would say on Monty Pythons Flying Circus, "and now for something completely different."
To combat this boringness, I put the rest of the soup in a frying pan and simmered off the little bit of broth that was still in it, rice usually absorbs most of the broth when it is in the fridge. In another bowl I scrambled up a few eggs. When the broth was mostly gone I poured the eggs into the soup and cooked the eggs. It turned out like a cross between Egg Foo Young and very thick, kicked up, egg drop soup. Whatever it was we all loved it.
Posted by ~*~The Family~*~ at 10:13 AM